In Iraq, many locals don’t trust the local medical establishment. In the province of Dhi Qar, for example, there was chaos at the beginning of the Covid-19 pandemic, with crowds rushing to local hospitals in a panic, begging for bottles of oxygen or a place in a bed. It’s no wonder then, that many locals here – including some medical professionals – prefer to stay at home once they realise they are infected with Covid-19.

Together with a group of volunteers, Jassim Mohammed had been helping quarantined neighbours, delivering food and telling people how best to cope with the infections.

As he did so, Mohammed had been taking every preventive measure he could think of. “I would constantly sterilize everything I touched, and I wore a mask and gloves all day,” he says. Despite this though, one day, he found he was suffering from a fever. Mohammed was quick to isolate himself, even before his Covid-19 test confirmed what he suspected: He had caught the virus.

“Most likely I was infected by a banknote,” he suggests – the quarantined families would pay him for the goods he delivered.

Mohammed, who is in his 40s, had already thought ahead: “I was very careful and I equipped one of the rooms in my house with a bed, an oxygen cylinder and a blood-oxygen meter. I removed all the air conditioning units from the room and bought packets of vitamins too,” he says. He told all nine members of his family they were not allowed to enter his room. Only his eldest son was permitted to come in, to give him food and medication.

As his sickness worsened – he became nauseous and lost his sense of taste and smell – Mohammed forced himself to eat. “Then I stopped watching the news and just practiced deep breathing exercises. I also rode my stationary bike for fitness.”

Mohammed would always lock his bedroom from the inside to prevent anybody from entering by mistake. One night though, he found himself gasping for breath. Luckily, his family heard his laboured breathing and broke the glass in the door, forcing their way inside to help him.

“Quarantining at home is definitely risky,” the Covid-19 survivor says now. “Because you don’t get any assistance from qualified medical staff.” Mohammed did eventually call his local hospital for advice and also contacted doctors on social media. In the end, he was in quarantine for a whole month. His best advice today: Don’t give in to fear and remain hopeful. 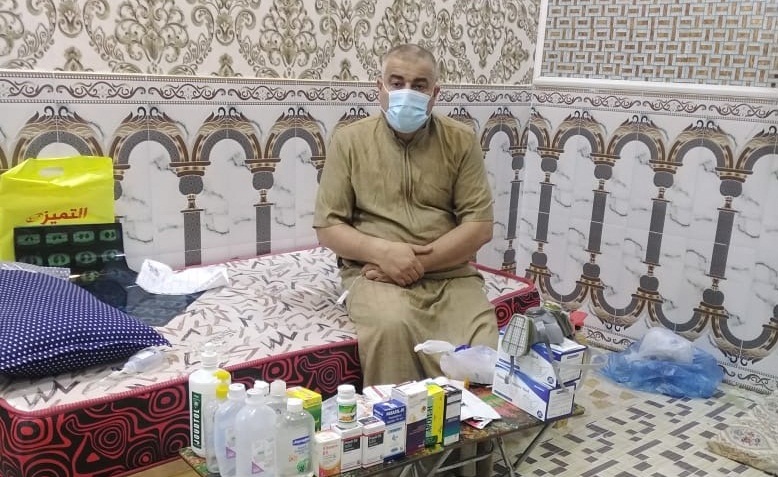 Nour Hamid works as a nurse at Al Moussawi hospital in Dhi Qar and she believes she became infected with Covid-19 after taking part in a pregnant woman’s caesarean operation.

“The high temperature inside the hospital and operating rooms forced us to loosen our personal protective equipment,” she explains. “It really obstructs your work and makes everybody more tired. So I lifted my mask for just a few minutes so I could catch a breath. A few days later I was diagnosed positive with Covid-19.”

Hamid decided to isolate herself at home. Because she is a nurse, she was able to take care of herself relatively well. She continuously took her own temperature and measured her blood oxygen levels; she also tried to eat good quality, healthy food. She recovered from the virus within a week, she says.

Aqeel Jabbar had been careful not to shake hands with anybody. He is the Iraqi national table tennis team’s coach but that hadn’t been a problem as training had been cancelled when the pandemic started. Unfortunately, it was Jabbar’s family that infected him.

His elderly father became sick 10 days after coming into contact with another sick relative. However his father didn’t have any symptoms for quite a long time so still infected his son and 11 other members of his family.

Almost all of the family members, including Jabbar, isolated themselves in their own homes. Jabbar’s wife took care of him but his biggest problem was his small daughter.

“Everyone tried to convince her to stay away from me but my little girl kept trying to break into my room and hug me. In the end, I had to shout at her to stay out. That hurt me a lot because that’s the first time I have ever treated her so harshly,” Jabbar says.

For four of the 17 days he eventually quarantined at home, Jabbar believes he was fighting for his life. It became very difficult for him to catch a breath even though his blood oxygen levels seemed normal.

Jabbar also experienced another strange symptom: He has had many sports injuries after years of coaching and training table tennis and somehow he felt their pain return to his body while he was sick and again while he was recovering from the virus.

Because of his coaching position, he was invited by senior sports figures to transfer to another country, Qatar, to be treated. But he refused. “I told them: I am no different to my fellow Iraqis. My presence here gives hope to others,” Jabbar recounts.

Since his recovery, Jabbar has donated his plasma to two other Covid-19 patients, one from Fallujah and the other from Nasiriyah, and he believes he has helped them recover too.

CHANGING FUNERAL TRADITIONS: How the pandemic has changed mourning in Iraq