Ezidies come from a past laden with oppression and massacre, they are targeted for genocide because of their distinct religious beliefs, however, despite their all the challenges they never gave up their beliefs, on the contrary, they tightly attached to and protect their  identity and history.

Ezidies have a bloody history and historically they have always been attacked and annihilated, the Turks call this process as “Farman” meaning it was an order to do so. The last wave of assault against Ezidies was the attack of the ISIS militants on Shingal on August 2014 in which thousands of Ezidies were displaced and uprooted. 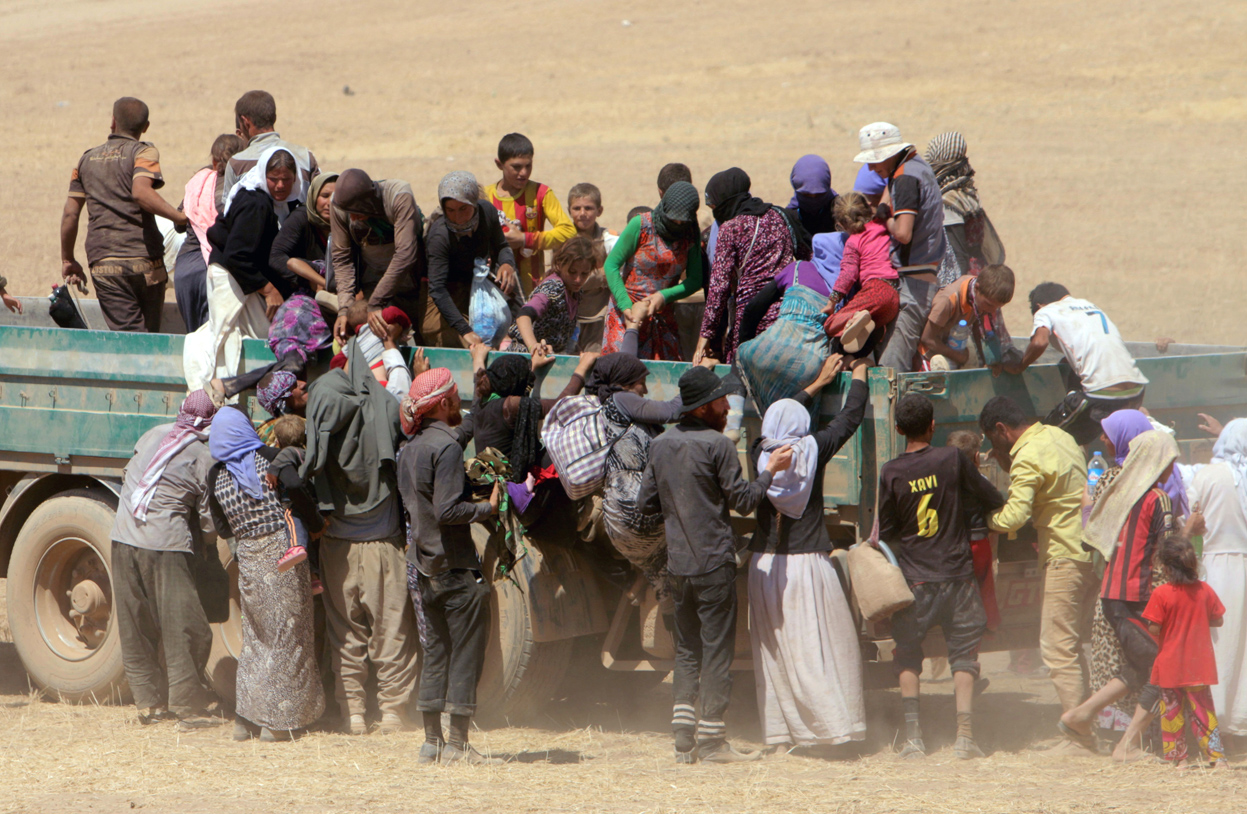 Many of the sources relate the root of Ezidi religion to the twelfth century A.D, when “Sheikhadi Bin Musafir” traveled from Levant of Syria to “Lalish”  he turned an old Mithras and Nestorian Church into their own place of religious worship and started to expand this mystifying religion.

It is a complicated story to understand the roots and ancestry of “Sheikhadi Bin Musafir”, there are many different and ambiguous narratives about the life and death of this man, however, what is clear is that Bin Musafir lived in and around the twelfth century, he was a well-respected nobleman and is considered the founder and initiator of Ezidi religion. Lalish worship place and Sheikhadi are considered the holiest places and reverend shrines of the Ezidies.

Sheikhadi and its followers are hiding the secret of their religion from non-Ezidies for centuries. This is one reason the Ezidies are hiding themselves in the distant villages, valleys,  and treacherous hills and mountains of Shiekhan, Baarde, Baashqa and Shingal.

The Ezidies are always accused of many things because they do not like to enlighten non-Ezidies about the truth of their religion. The world of Ezidies are a closed world, no one can convert to Ezidi religion and no Ezidi can also leave and or convert to another religion. This religion can only expand through blood. The Ezidies have always lived as small groups and were spread in the towns and sub-districts surrounding Mosul, they are isolated group of people who were doing farming and raising animals as a source of income and livelihood and thus they have always protected their own cultures.

All the followers of this religion are ethnically kurds and they own two holy books called “Jalwa” and “Black Mashaf”. In this religion there is a system of that classifies the people into certain classes, there are some classes who inherit their social status from their forefathers. Even though they believe in polygamy they cannot marry from the other classes which they do not belong. They have to marry only from their own classes.

“Meer” and or the Prince is at the top of the religious and worldly authority. Meer is considered the leader of all the Ezidi people in the World and is the representative of the Shiekhadi. The Meer’s ancestry goes back to Shiekh Abu Barakaty son of Sakhar son of Sakhar son of Mosafir the nephew of Shiekhadi. The Meer has a God Like authority and they have absolute immunity, no one can disobey them and they supervise the religious and endowment affairs of all the Ezidies.

The current Meer “Prince” of Ezidies now is Meer Tahsin Bag son of Saeed Bag, he has been the Prince of Ezidies for the past 74 years. He was only nine year old when he become the Prince in 1945 and his grandmother Mayan Khatoon has become his advisor since then. Until now the Ezidies have never been able to change and or replace their Prince. For he becomes the Prince for life and even after his death the position of the Prince will be reserved for one of his son and or brother. The position of the Prince will be inherited from the same Prince family and the next prince should be born into a Prince family and no one can change this order.

Then the other classes are Shiekhs, Peer (Elderly), Fakeer (Poor), Mureed and Kochik. Each of these classes implement a specific affairs and or religious affairs of the Ezidies. Some of them make sacrifices to serve the shrine of Shiekhadi and are venerated for that service. Some others are reciting religious anthems on festivals and specific occasions and Mureed is also considered the lowest level of them.

The Ezidies fast only three days annually. They fast on 13th, 14th and 15th January of each year. They have several different feast days, the most important of them all is the Ezidi New Year Feast. This is celebrated every year on the first Wednesday of April and lasts for one week. They also celebrate the feast of Jama, the feast of Wednesday Sor and the peak of Summer season.

Each day the Ezidies light 156 candle lamps at the Lalish temple during the dusk. For hundreds of years they have allocated dozens of oil containers to burn the lights of this Worship place. They hold the lights in sequence and burn them with the olive oil. Each Wednesday twilight they light and burn 255 lamps as Wednesday is considered a consecrated day compared with the rest of the other days. This is because on Wednesday the Taws Malak ( Peacock King) was descending.  They also burn 366 candle lights on the other feasts of Jamaw, Summer Season, New Year and Wednesday Sor because the Ezidies have 366 days per an annual calendar.

In Ezidi religion “sun, fire, soil and water” are sacred. According to their belief the source of the well of Zimzim water and Kani Spi (White Well) are springing and are located at the cave of Lalish mountain. This place is considered to be paradise and every one should be christened with Awa Mor (Purple Water). Black snakes are also considered sacred in Ezidi religion that is why the graves and shrines of all the good men of Ezidies are carved with snake icons. It is considered unholy and blasphemous act to kill a black snake. This is because as legends tell that during the epic global flooding the ark of Noah was subjected to holes and cracks and it was about to sink, however, it was black snakes which filled the gap and put themselves in those holes and this way they acted as saviors of all mankind.

Ezidies do not use blue color in their clothes and refrain from eating some vegetables and meat like cauliflower, rooster and cockerel. Some of the historians believe that Ezidism is an ancient kurdish religion prior to the advent of Islam and its roots date back to Zarazostrianism and Monism. The global dualistic philosophy of Zarazostrianism of light and darkness and the worship of sun can be detected in some anthems of this religion. One can see the engraving and carving of sun and sun iconography in most of the shrines and  house of worship  and the direction of their graves are facing the East and Sunrise.

In terms of tradition and religious beliefs Ezidies have many features in common with Islam, Christians, Judaism, Kakai, Zarazostrians and the root of all the Semitic religions can be seen in Ezidism. They practice circumcision just like Muslims and Jews and they also believe in sacrifice, charity and alms giving. Just like Christians they also practice baptism and the use of wine and music in their religious ceremonies and anthems, also like the Zarazostrians they believe in the consecration of sun and fire. Also like the kakais they believe in reincarnation of the soul and spirit.

In the house of worship of Lalish there are three sacred things mentioned which are also the same exact three things in Islam that people do pilgrimages for in Macca and Madina, these are Awi Zimzim(Zimzim Water), the mountain of Arafat and Pilgrimage.

The Ezidi population in Kurdistan is now estimated to be between 400,000 to 700,000 people. Some of them fled genocide, massacre and slaughter in the Eighteenth and Nineteenth Century and immigrated to Armenia and Georgia and until now they live there. Some of them also live in Hasaka and Afrin in Syria while some other Ezidi also live in Qars and Erdekhan in Turkey. The majority of Ezidi Diaspora live Germany. They immigrated to Germany in some different phases, in the 1970s the majority of the Ezidi from Northern Kurdistan went to Germany, later the Ezidis of the Former Soviet Union immigrated to Germany and even now the majority of those Ezidies who leave kurdistan go to Germany.

In Germany, the Ezidis have several organizations, social and cultural centers of their own and a few years ago an Ezidi girl named “Falaknas Oja” become a member of parliament in the European Parliamant. This Ezidi girl was born in Germany from a kurdish Ezidi family from Northern Kurdistan.

The Ezidis are now greatly concerned that their homeland has been turned into the theatre of war and political conflict. They believe what is happening now to their land is the most horrifying and tragic event in the history of the Ezidi people.