UNESCO and the United Nations Human Settlements Program (UNCHS) held the “Old City of Mosul Forum” to develop an appropriate planning for the reconstruction of the old city of Mosul and to preserve the heritage of its archaeological areas.

Abdel Moneim El-Jaboori, a director of the Nineveh Center for Studies and Research at the Mosul Media platform said that “More than 350 heritage sites have been identified during UNESCO’s initial planning in the Old City and its heritage should be preserved during future reconstruction”. 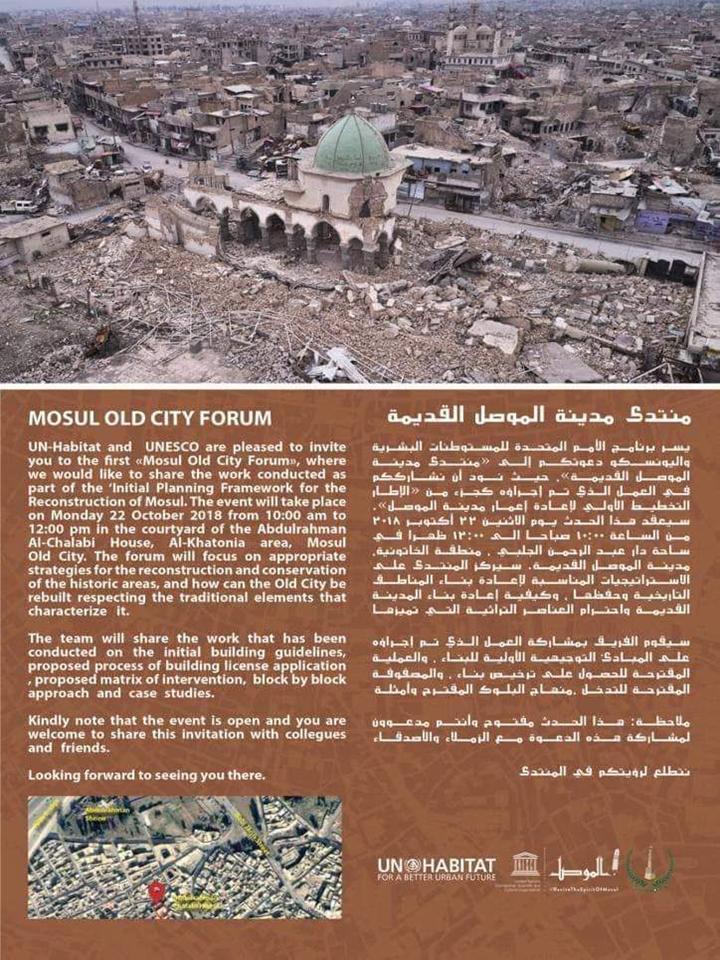 The forum, which was held on Monday in the house of Abdel Rahman Al-Chalabi in the Khatouniya area of the Old City, comes within the framework of UNESCO’s plan to rebuild Mosul and rehabilitate its infrastructure to encourage the return of the displaced people.

Mosaab Mohammed Jassim, a director of the Nineveh Antiquities Inspectorate said that: “There are about 2,500 archaeological sites in the entire province of Nineveh, of which more than 300 heritage sites are located in old Mosul. These archeological sites are divided into four sections depending on the type of building and the date of its construction”.

The people of the Old Mosul, as well as a number of specialists and researchers in the monuments and heritage of Nineveh, had a notable presence and participation in the planning of the reconstruction of their areas.

Jovana Fontyaki, UNESCO representative in Iraq told Mosul Media Platform
“The choice of this heritage house belonging to the Chalabi family to meet and gather here was accurate and we did not choose a mosque, a church, or any religious or political site because we need to take the views of the ancient people of Mosul in our work”.

The Forum focused on implementing appropriate strategies for the reconstruction and preservation of historical area, and rebuilding the old city of Mosul and respect all the heritage elements it represents. The Forum hopes to formulate a common vision on the future of Mosul and get the necessary funding from to donors to rebuild the city of Mosul.