She calls on her daughter to fetch and pour water for kneading the clay and put it on a ring completing her work just before we arrived. She is working on making her own clay oven in a camp where no one has been doing anything but eating and sleeping for more than a year.

“I spend two full days to the manufacture one clay oven and I sell each one for five thousand Iraqi Dinars ( equal to only $ 4 USD),” says Umm Ahmed, while wiping her muddy hands.

Hassan Sham camp is one of the three camps beside the camps of Khazr and Jamkur. It is located east of Mosul and was set up in the initial phases of military operations in October 2016.

Umm Ahmed is only one of the thousands of the displaced people from Nineveh who lives in Hassan Sham camp in a condition similar to house arrest and or forced and concentration camps. They are no allowed to exit and or leave the camp except in emergency conditions. The displaced people in this camp do not have any job and or work and they only rely on aid and assistance offered by International and governmental organizations.

“My work is to make the clay oven on which the displaced people depend on to make their bread. Clay ovens do not need electricity, gas or oil. However, it is not worth the effort and the hard work exerted by me and my daughters, but I need to be able to support my family,” Umm Ahmed said, while she is digging the mud, kneading and polishing the clay very well.

The raw materials needed to make a clay oven are available in the camp. These materials consists of mud, water, salt and some hay (it is comprised of pulverized wheat stalks or barley) as Umm Ahmed explained it for us.

The camp of the IDPs stretches to a large swam of area in the village of Hassan Sham. This camp comprises of four other camps, which was expanded during the fighting in December 2016 and July 2017. As the numbers if IDPs increased this led to the opening of another camp in the village of Jamkur,

In Khazir also there are some small shops and working places. Inside the camp there are dozens of small shops and businesses opened by women, especially by widows who are selling basics stuff like food and some children’s sweets and confectionary. These women do not have any monthly income nor any social welfare provided for them. 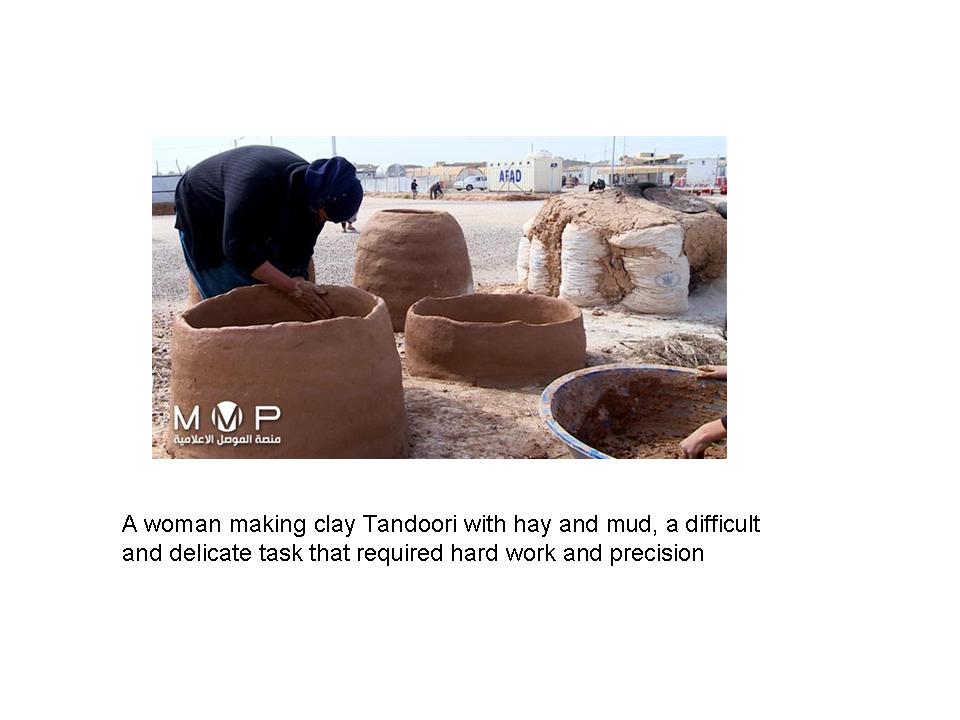 Umm Mohammed is also another IDP from the camp. She is a widowed mother of a widow and are from Musheirfa area, northwest of Mosul. Umm Mohammed and other widows of the camp seek to defend the rights of women who have lost their homes. These women have forgotten the notion of one day returning to their city because they have lost their husbands in the fighting with ISIS.

“My husband was killed during the displacement. We buried him on the road and we went to the camp and since then we have been spending our life here in this camp” Umm Mohammed said this while she was sitting in her sun burned and impoverished tent.

Umm Mohammed now sells bread to make ends meet and to provide the livelihood and the needs of her family and her four children.

“My daughter is another widow like me, despite her young age, we lost our husbands and no one comes here to register us and or care for these women,” she concluded her speech.

Sewing, knitting, tailoring, and embroidery are the only way of providing a resource of income for the women in the camp. These IDP women sell their products to the other displaced people at a lower prices. However, the money they earn from these works are not adequate to bring a kilogram of meat for their family and their children who have been deprived since the beginning of their displacement and for such a long time.

There are many reasons that prevents these IDPs to return to their newly liberated cities, such as the high cost of living, the high cost of rent and resettlement, the lack of employment opportunities and the lack of government plans to assist a dignified return and reintegrate them into society.