A forty year old woman named Umm Karar from Diwaniyah Province (181 km) south of Baghdad has opened her private bakery to support her children and her ailing husband. It is the first bakery to be opened by a woman in Iraq, despite all social restrictions which has forced women to bake breads at home and sell it in the markets.

In the open air and on the main street of Diwaniyah province, Umm Karar stands in her small bakery shop to bake bread that has attracted many customers. She says “There is no objection to women practicing any work, provided that women believe in their work and trust themselves”.

Umm Karar believes in women and men partnership to bear the burden of life. When her husband had a job and was working, she worked in her house. However, after her husband lost his job due to illness she decided to launch her own project with the help of her children and open her own bakery shop.

Iraqis are not often accustomed to seeing a lady working in an open-air bakery and on the main street. Female bakers usually work in their homes, while male bakers monopolize the bread shops and sell them in the city and its neighborhoods. However, customers believe in her bakery skills and her ability to make a special bread. It is quite natural for them to see a female baker.

Not only did Umm Karar (the mother of Karrar) open her small bakery shop, but she put a sign that reads “The Bakery of the Mujahid Woman” and while baking she wore a shirt in a different color very similar to the uniform of the fighters on the front-lines. Perhaps she wanted to symbolize that she fights poverty and seeks victory like a soldier seeking victory in battle.

The delicious bread maker derived the name of her bakery from a philosophy she believes in. She says “Working is like jihad, the one who works to gain his strength and faces the difficult circumstances is a true Mujaheed “Fighter” in this life. That is why I chose this name for my bakery shop”. 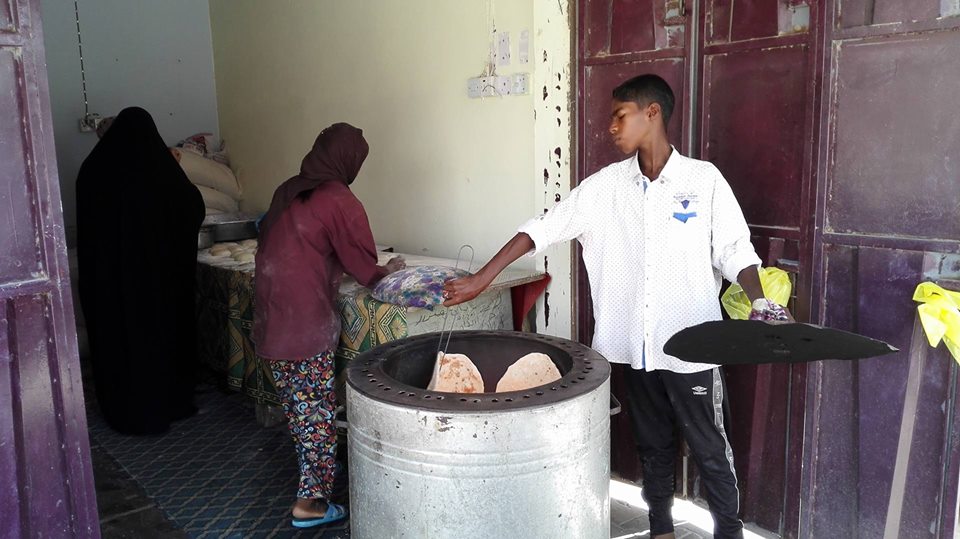 Umm karar works hard and does not hide her smile, as she has won many customers who travel long distances to buy bread from her bakery. Her breads are warm, fresh and tasty and the local customers like it so.

One of her permanent customers says “My family love this bread because it has its own taste and flavor, which reminds us of the beautiful days of the past. The bread was large, tasty and has a fine smell”.

The “Mujahdeen Woman Bakery Shop” has attracted many customers and she did not face any difficulty in opening the bakery shop. Many customers encourage her and complemented her work as motivational effort.  “It was a positive motivation to continue to work and to provide the best services,” she says with a smile while sweating on her forehead during her work.

Although the work of manufacturing bread is very burdensome, especially in the summer season, but she considered her simple project providing much psychological comfort. Umm Karar believes in her own ability to sustain the project “when I return home with my earned livelihood all the fatigue disappears, I am proud of myself and my work is the secret that makes me feel happy”.

She also adds “I feel that my mission in life is the struggle for a decent living and the bakery must maintain this message alive for all people to feel that women are struggling like men for their dignity and they take full responsibility.”

Umm Karkar’s message for all other women is that they should be self-reliant, avoid humiliation and destitution even if they are not educated or has no craft. They should start learning sewing or manufacture food products or do something they like and do not depend on other people. They should choose their own independent work even if they did not need money.