Among the floating villages in the marshes of southern Iraq are the Sumerian houses made of reed, which are characterized by a unique architectural style inherited by the ancient Sumerians. The mud figure found in this area shows that the images of these caves appeared on cylindrical seals dating back to more than three thousand years.

On the occasion of the songs and folk songs, the southern tribe is to build its Sumerian host of reeds, mats and ropes to be the title of their tribe with the participation of dozens of sturdy men in the construction stages ranging from one week to two weeks depending on the size of the host. The construction of these places that receive the tribesmen and their guests requires great skill and experience. There are specialists in this type of architecture, the local people call them as “stables”. 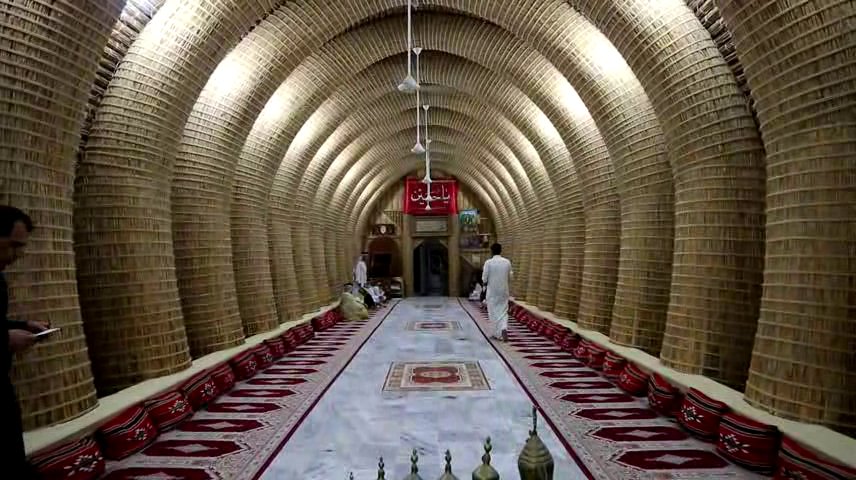 Haji Abbas Shaker is at his sixtieth and one of the best known stonecutters in the province of Dhi Qar in southern Iraq. He has three decades of experience. He says that the construction stages start with the establishment of “al-Shaba”, which is the building’s foundations. The smallest of the hosts has seven building foundations and the largest host has twenty-one.

Haji Abbas pointed out that the work begins from the distribution of the tender reed substrates by the tribesmen who help him and install them and covered with cane mats and tight ropes made for this purpose to become a place for sitting the tribesmen and its members and guests bear the volatile weather conditions, despite the simplicity of the raw materials used in construction.

The Sumerian hosts dates back to the Sumerian civilization. The old builders of Iraq take the form of the inverted vessel. It consists of individual pillars bearing the symbol of unity. It has been built in southern Iraq for thousands of years and is concentrated in the areas of the marshes and tribes scattered in all regions of Dhi Qar and some neighboring cities. 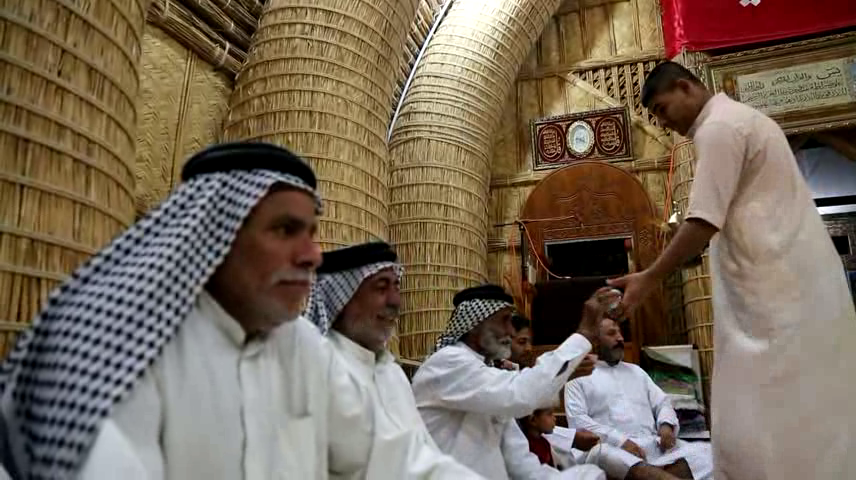 Historian Morteza al-Hadud says that the host has a social symbol for the unity of the tribe because it represents the center of decision through the gathering of the tribe members daily in this place in the morning and evening until the late hours of the night where discussions and talk in various affairs and constitutes a real school of masculinity and the arts of life and usually describes these clan members gatherings within host as (councils).

Sheikh Ali Jassim, a 50-year-old elder of the al-Azzir tribe, said that the host is a great necessity for the clan. It is the expanded meeting board, the guests’ reception, the hospitality court, the council of divinity, solving the problems and resolving differences between the people. It plays the role of the court for the sons of one tribe or between two people from two different tribes.

He pointed out that the host today is an important symbol of the clan and the hours of coffee known as men come in the morning and evening to exchange views and ideas and the latest developments and the formulation of decisions that serve the tribe and its members and everyone is bound by it without violating it because it takes the advice of those present.

The Sumerian sanctuary still retains a special tradition, most of which disappeared with the rest of the clans, and there are general etiquette to be observed when entering and participating in discussions.

Manshid Wali, a 57-year-old resident of the al-Askiya area south of the city of al-Nasiriyah, says that the presence of the host’s office has control that everyone must adhere to, including peace for everyone, sitting in the specified place, drinking a cup of coffee with his right hand, Compensates schools for the teaching of literature in speech and conversation.

The governorate of Dhi Qar, one of the southern cities of Iraq, hosts more than 500 Sumerian hosts representing different colors of the Arab tribes, which are divided into sections, most of which are interconnected and linked to the bonds of kinship and solidarity among the people.