Whole families descend upon a landfill south of the city before dawn, waiting for the rubbish from which they make a living.

Every day at dawn, local woman Um Javad – she only wishes to give this name – is up and walking around the alleys of the central Iraqi city of Kut.

She is searching for plastic bottles, cans and other refuse that she can potentially sell, in order to make a living for her family. It is the only option the 65-year-old has to feed her family of four.

“I have been living on garbage for years and I go every day to dig in what houses and stores throw out, looking for empty bottles and other things I can sell,” the bony old woman says, adding that she starts this kind of work early in the morning, so she can return home before the temperatures rise at noon.

Um Javad is not the only local living this way. The landfills south of the city are another place where you can find those making a living off refuse. The saddest stories are those involving children. Jalal is just 12 years old and he and his younger brother come to the landfill every day. Child labour laws are not enforced in Kut and this is how the siblings earn enough to eat. 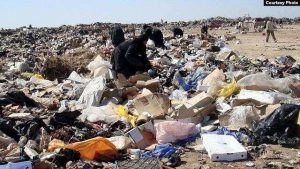 “This pile of trash is credit for me and my family,” Jalal tells Al Menassa, as he struggles to sort through the garbage.

Another young man, who wouldn’t give his name, also arrives at the landfill. He says he usually arrives before dawn in order to catch the trucks that bring rubbish from the markets or the houses of wealthier citizens – this way he gets first pick of what arrives.

One of the garbage truck drivers, Alaa Karim, explains how the system works here. “The pickers are always waiting here. And sometimes they reserve certain truckloads for one another because they know what they will find there, depending on what part of the city the truck is coming from,” he says.

Most of the garbage pickers don’t complain about the conditions at the landfill. Rather they will tell you about unemployment in the region and how it has forced them into this work.

Another young man at the landfill says he makes around US$5 a day but he says it’s better than nothing at all. “My biggest concerns are being injured by glass, or debris or other things, or accidentally touching disgusting things, like children’s excretions,” the 20-year-old explains. “We eat here, we sleep here and we live normally here,” says the young man, before chasing after a truck that has just arrived.