The restaurant in the central Iraqi city of Kut (K.S.G) has only been open one month but already it is exceedingly popular with local diners – partly because of the good food served here but also because of the sense of the owners’ entrepreneurship. Residents think this is worth supporting.

The restaurant was founded by a young veterinarian and two engineers. Doctor Karar Thamer and his two friends, software engineers Ghaith al-Quraishi and Sajad Naseer, are all in their 30s. A lack of suitable jobs in the area saw the trio decide to open a restaurant, something none of them were qualified for.

The men managed to open and equip the restaurant, for just under US$4,800, paying for kitchen equipment in instalments. It wasn’t easy, Thamer told Al Menassa. “But the community support was wonderful, especially in such a competitive market,” he says. “I feel like our story is an illustration of how nothing is impossible for people, if they really set their minds to it and if they think outside the box.”

Nasser boasts that the restaurant is developing its own secret recipes for Kut diners, who, he says, like to try new things. The eatery became popular with students and staff working in nearby government offices.

“I never thought I’d end up working in this field but sometimes life makes other plans,” Nasser says. 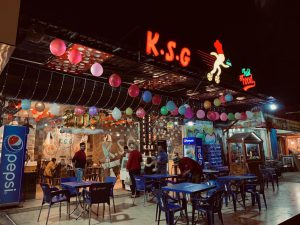 Running the restaurant doesn’t mean the software engineers have left their old lives behind completely.  Al-Quraishi is trying to develop a smart phone application to promote the restaurant, that will allow customers to order meals online and use the business’ free delivery service.

Many of the regulars told Al Menassa they had no idea that the restaurants’ owners were all well-qualified graduates. One regular, Ali al-Saray says he’s noticed that these restauranteurs are different from others, saying they seem more relaxed and pleasant.

“We respect them because they represent entrepreneurship at its best,” says another customer Haider Bashar. Other locals explain that they’re here simply because the food is delicious. That might be because of the owners’ qualifications, they joke.