They call them the “golden sect” because many members of the Iraqi ethnic minority traditionally work in goldsmithing.

These include a hammer, an anvil and wire. “We use a clay stove to melt the metal and a clamp to pull it out,” Ajil explains.

Ajil inherited this trade from his Sabean-Mandean ancestors, who worked first as fishermen, blacksmiths and farmers in Iraq’s southern marshes before moving to southern cities to work with Iraqi Jews in metalwork. Ajil himself has been a goldsmith since he was 11; he’s in his 60s now. 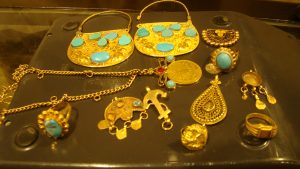 He shows visitors around his small workshop. He makes women’s jewellery as well as such things as small bells for the cots of new-borns. Sometimes his customers insist on sitting next to him as he makes up orders.

One of the main problems of the job today is getting the gold. It is usually imported from Dubai, Turkey, Kuwait and Singapore but there are often delays, he notes, and buyers must also pay a 5 percent tax. “A kilogram of gold costs about US$900, more than the official rate,” Ajil points out.

A lot of gold is also smuggled in, via northern Iraq – this is often melted down to disguise its origin and then sold as legal gold.

There is also a lot more competition these days. At one stage it was only the Sabean-Mandeans and the Jewish people working as goldsmiths here. Ajil mourns the fact that today, the old methods of goldsmithing are being forgotten and anyone can – and does – get involved in selling and crafting gold.

Today gold sellers in Basra can be divided into two categories. There are those who make gold jewellery, hand crafting designs of all kinds – most often these are the Sabean-Mandean goldsmiths. The second category is occupied by those who retail gold and Ajil says there are some big aesthetic differences.

Sabean-Mandean spiritual leader, Mazen Nayef, can’t say for sure how many of his people are left in Iraq. But he does know that those who goldsmith are often targeted for blackmail and other crimes. People think the Sabean-Mandeans are wealthy because of what they do, he says.

“But we won’t give up our profession,” Nayef told Al Menassa. “It’s difficult, it requires creativity and one should practice it from a young age because you’re dealing with such a valuable material.”