They have been beaten, injured, kidnapped and many killed. But Iraqi’s protesters are not giving up. Many fear an even worse fate awaits them if they do.

A hundred days since the start of Iraq’s anti-government protests and there are mixed feelings and tired faces at the epicentre of the protests, on Baghdad’s Tahrir Square. Last week, protesters in Nasiriyah issued a statement setting another deadline for the appointment of an independent politician as Iraqi prime minister and a date for early elections. They say that if this doesn’t happen, they will block roads between their province and others. Demonstrators in Baghdad, Diwaniyah, Wasit and Basra announced their support for this statement and the deadline, which expires Sunday.
It seems clear that, even after 100 days, the protesters are not going anywhere. Over three months, there have been challenges and triumphs for them, and there is no doubt that the protests have caused a seismic shift in the way ordinary Iraqis think about politics. They have also caused changes at the most senior levels of government, one of these being the current prime minister’s stated intention to resign.
“In the demonstrators’ camp, we’ve been through a lot,” says Abdul Karim al-Marsoumi, one of the protesters in Baghdad. “More than 600 protesters have been killed and thousands more injured. Kidnapping, threats and assassinations are a constant danger. But we remain steadfast and determined. We are still chanting this slogan: ‘Whether one dies or a hundred die, we will remain’.”
When the funeral processions for those who have been killed pass through the various protest sites, it just makes the young Iraqis there more determined to carry on.
But it’s not just the security forces’ and other militia groups’ violent response to some of the protest actions that have caused injuries and deaths. There is danger and intimidation at all times. The protesters are only too well aware that some of those at demonstrations may not be friendly to their cause – they know that political parties, militias and security forces will have sent spies to infiltrate their ranks, either to find out about or influence future plans.
Last week, two journalists active in protests around Basra – Ahmed Abdel Samad and Safaa Ghali – were shot and killed. Four days later one of the protesters in Baghdad, Abdel-Kahar al-Ani, was kidnapped as he was returning to his home from the main demonstrators’ camp in Tahrir Square. 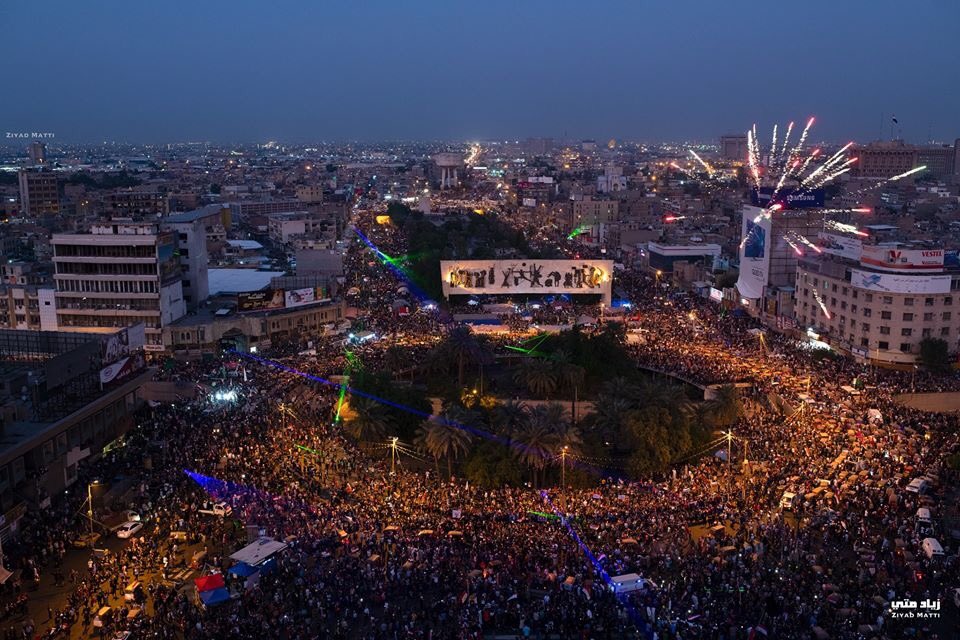 This kind of intimidation and assault is commonplace and ongoing.
The protesters have also had to deal with being challenged by the local media and online. Partisan media outlets, which make up the majority of press in Iraq, have launched campaigns against them, questioning their motives and tactics. Online, so-called “cyber armies” – that is, online activists deployed by, or paid by, parties who oppose the demonstrations’ aims – spread rumours and false reports about what is going on in the protest camps. The Iraqi protesters were accused of being spies, traitors and of being paid by foreigners to destroy Iraq. Some of the protesters had taken to wearing masks or make up to resemble that of the main character in the new Joker movie. They saw some of the character’s actions as revolutionary against an oppressive system. However this was turned against them online, with their opponents labelling them “the American Joker”, implying that those who dressed this way had allegiance to the US.
It is unclear how successful these online campaigns were. “Even the most powerful cyber armies couldn’t discredit us because it is clear the Iraqi people sympathise with us,” explains activist Roha Mohammed Ali. “When a protester publishes something on Facebook or Twitter, he gets an enormous reaction without paying a single cent to promote the post. Cyber-armies are spending thousands to discredit our reputation but they never get any interactions. Most of their pages end up being closed down, thanks to Iraqi solidarity,” he suggests.
The biggest challenge over the past 100 days though, were the targeted assassinations of Iranian military leader, Qasim Soleimani, and Iraqi militia leader, Abu Mahdi al-Mohandes, near Baghdad airport. After this, many of the protestors – like other ordinary Iraqis – were worried that the country was on the brink of war, with Iraq about to become the battleground for its two angry allies, Iran and the US. They were concerned that it was no longer an appropriate time to try and press home their demands for political change.
Many of those who were not involved thought that the protests might fade away after the murders. But contrary to popular expectations, the protesters remained where they were. They raised banners saying, “no to America, no to Iran” and said they did not want to see their country used as a battleground for the international foes. They also blamed their own government for being too weak and too beholden to foreign interests to prevent future confrontations like this, as well as the illegal assassinations.
And so the demonstrators stayed. At the same time though, they have become even more afraid of the authorities and less inclined to return to their homes, believing that there is some safety in their numbers.
One young man who wished to be known only as Marsoumi says that, when he goes home, he wears a disguise, because he is worried about being caught by assassins. The protesters believe there may be a list of names targeted for kidnapping or death. “We know which groups have the lists of names of those who participated in the protests – and we know these lists are accurate,” Marsoumi tells Al Menassa. “They’re just waiting for us to return to our homes after the protests finish and then they will attack. That’s why we won’t go home. The protests protect us.”
“The demonstrators won’t go home until their homeland, which was stolen by corrupt politicians, is returned to them,” adds activist Ali. “They won’t stop until the deaths of those who were killed protesting have been justified, by change.”