It is almost impossible to memorialize someone as colossal as Hisham al Hashimi in words.  It is more impossible to fathom that he is gone, that such a gigantic life can end, taken by a bullet.

He meant so much to so many. He did so much for so many and for his country.  He was a man of boundless energy and generosity who worked tirelessly to bring together disparate people and groups, all with the goal of rebuilding Iraq and of explaining it to an often-confused world.  He was an immense presence and the void that he leaves is huge. Iraq has a big hole in it as do many of our hearts.

To me, and to many others, Hisham was so much more than his public persona. He was a dear and giving friend. Hopping around Baghdad, often with my partners in crime, Renad Mansour and Toby Dodge, we would inevitably find ourselves in Hisham’s car, heading to a meeting or going out for a meal. “Kaka Hisham,” I’d call him affectionately, a throwback to my days in Iraqi Kurdistan Region [kaka means brother in Kurdish].

He would respond “modeera “or “hajiya” – monikers of respect that he deserved far more than I did. Our trips to Baghdad will never be the same.

Going out with Hisham was like being in the company of a celebrity, albeit a modest one.  People would greet him constantly and heads would turn left and right as he passed.  Whether we were going to eat masgouf [an Iraqi fish dish] at one of his favourite spots, Al Mahar Fish in Karrada (where he always ordered ahead and paid in advance, frustrating my endless efforts to slip the owners the money) or walking through Mutanabi on a Friday, it was always the same.  People would recognize him and call out to him fondly, “Salam, Doctor”. He was beloved and respected.

Hisham’s smile was contagious, deep and genuine, a mirror of his personality. He was quick to make a joke and to laugh at mine. His generosity, his interest in helping me, and helping others, was boundless. Whenever I uttered the phrase “I’m going to…”, Hisham would interrupt with, “I’ll take you” before I even mentioned the destination.  When I said,  “I need to talk to ….”, Hisham was dialling their number before I got to the person’s last name. He would take me wherever I wanted to go and connect me with whomever I wanted to see, normally before I could even ask.

Not long ago, Hisham took a day out of his ridiculously busy schedule to drive Renad, Toby and I to Anbar University for a conversation with the university president and some of his colleagues.  He did it to try to help the university, to build relationships, and to help us, his friends. I remember wondering at the time – as I always did when I was with Hisham – how, with his endless reports due, ongoing projects and interviews to do, he had the time to help us.  But he always did, no matter what. 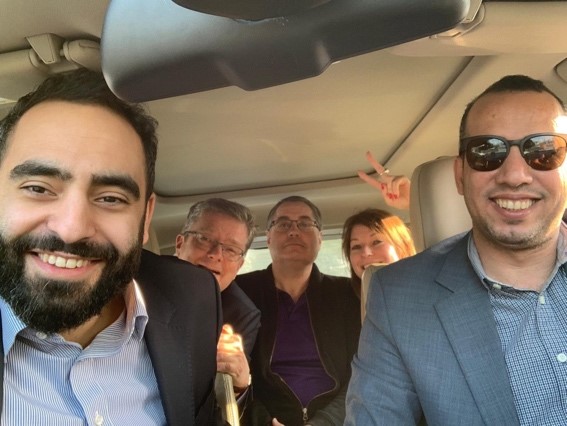 After we left Al Mahar one day, I remember him saying that he had to get his blazer, which he had left at home, in order to be interviewed at one Tv station, or another. I remember wondering how he was going to get all the way there, in an hour in Baghdad traffic and after taking us home, which he had insisted on. I wondered to myself how he ever managed to prepare for the interviews given his schedule. But his schedule was his preparation. Every second of every day of his life was consumed with Iraq, his determination to make it a better country and his efforts to explain it to anyone who was willing to listen.

I was in awe of Hisham, what he did and how he did it and how he stayed alive.

Outside of Iraq, Hisham was best known for his analysis and insights around the country’s security sector. But he had his hand in a multitude of projects, many of which were far more important in the parts of Iraq I wanted to see grow. He mentored and organized youth leaders all over Iraq, he linked promising young artists and musicians up with wealthy Iraqis and diplomatic communities to fund their study and travel and he helped me with my project to develop a business school in Baghdad, not just because I was his friend, but because he thought it would help young Iraqis develop the skills they needed to find employment.

Hisham was also heavily involved in efforts toward national reconciliation in Iraq. Often he would connect activists with political leaders to bridge the gap between Iraqi citizens and the Iraqi elite. In recent months, he had been doing his best to help Iraqi protesters organize themselves and connect with the political elite.

These labours encapsulate the man. I think of Hisham as a focal point, the node around which many different communities and individuals connected in Iraq. He brought people and groups together, sometimes at great personal risk. He spent one hour with the prime minster or president, the next with civil society leaders, the third with the head of one militia or another, the next at an Embassy, then with a group of visiting think tankers. In between and during his meetings, his phones would be buzzing. He was a natural networker and was trying to help build a better society and ultimately, he hoped, country. He was on everyone’s side but none more so than Iraq.

More than anything my heart aches for his family: his four kids and his widow. For the most part, he kept them separate from work but it was not hard to tell that he was a devoted father and husband.  He would mention his children from time to time and our adventures would sometimes include stops along the way to buy his daughter and sons books.

I hope that there will be justice for Hisham, that his senseless murder will be a kind of “George Floyd” moment for Iraq, one that galvanizes a popular movement working towards the kind of Iraq that he struggled for, every day of his life.

He wanted to see citizens empowered, communities united, good governance and the end of corruption, lawlessness and militia violence. He wanted a better life for all Iraqis. If that comes to pass, that would be real justice served.

But that will take a government and a political class that shares Hisham’s priorities and is willing to hold themselves, his killers, and those of so many others, accountable. If Iraq’s leaders, so public in their outpouring of grief at Hisham’s death, want to truly honour him, they will need to be bold, and show an ounce of his courage and determination to rebuild a state and society, rather than hide behind fancy words.

They will need to continue down his path, and join those Iraqis who are working for a better Iraq, and risking their lives to do it. Hisham showed us the good that one person can do, with hard work and even a small amount of power. That is the inspiration and impetus that Iraqis, and all of us, can take from his tragically short but immensely consequential life.

We can do his death justice by continuing his work and good deeds, big and small, for Iraq and for each other. In Hisham’s case, that will take no less than all those who care about Iraq. 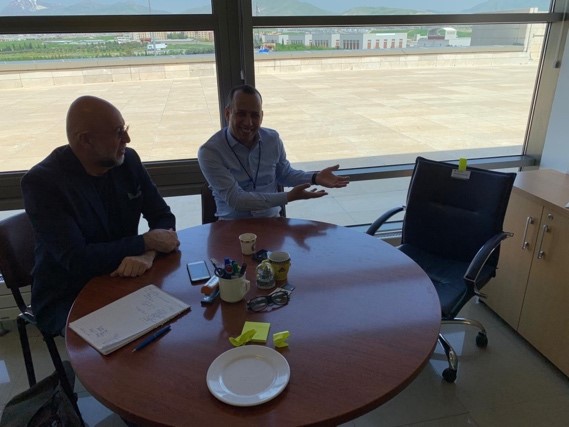