The Iraqi elections are fast approaching – they’re due to be held on October 10. But campaigning by Iraqi candidates is off to a strangely slow start. Candidates have been scarce at public meetings, nor do they hold rallies or public meetings to introduce themselves and their agendas.

By Alaa Kouli in Dhi Qar

“Election campaigning is not the same as in previous years because of what has been happening in Iraq recently” Muzaffar al-Zaidi, a candidate who’s hoping to run for office in the province of Dhi Qar, told Al Menassa. Firstly, he explained, candidates are worried that the elections might be postponed and secondly, there has been an increase in the harassment of candidates.

In June, the rally of candidate in Babel province was disrupted when a mob clashed with the politician’s supporters. The group ended up fighting with chairs and other weapons and the rally had to be cancelled.

It’s the same right around the country, confirms another candidate, Miqdad Abu al-Hayil, who’s hoping to run for office the southern province of Basra.

“Many candidates worry about their showing posters and manifestoes ahead of time, especially if the elections should happen to be postponed,” al-Hayil explained. “It’s like showing your hidden cards.”

Nisan Abdel Rida, a candidate for a district in the city of Nasiriyah, says she hasn’t yet been harassed or abused. But she expects this to happen as soon as she begins to campaign for real.

Falah al-Hilali, who’s running for office in the Shatra neighborhood in Nasiriyah, said that as soon as he started to put up his posters and announced his political affiliations, the abuse began.

“This campaign to slander me is happening on social media and it is also happening on the ground,” he explained. He believes his competitors and their supporters are behind the abuse and he believes they are “systematically sabotaging election banners and posters, and attempting to disrupt election rallies by provoking fights at each one”. 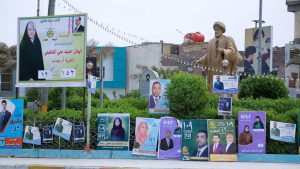 Al-Hilali believes things are just going to get worse as the date of the ballot approaches.

The previous date for Iraq’s federal election was June 2022 but it was brought forward to this October in order to take the steam out of long-running anti-government protests.

“The Iraqi prime minister, Mustafa al-Kadhimi, set the new election date in order to try and get as many of the participants to participate,” explains Bassem Mohammed Habib, a local academic. “When he did this, the participants had two options. They could either continue to protest or they could create political parties and try to achieve their goals through the democratic process.”

And the political parties that emerged from the protests have been particularly careful with their campaigning. “We’ve been keen because we don’t want to reveal everything to the more powerful, traditional political parties,” Ali al-Tamimi, an activist in one of those younger parties, explains. “It could have a negative impact.”

The other aspect to the protester parties’ slower start is also financial, al-Tamimi noted. They don’t have as much money as the long-standing political groups so there are not as many simply campaign materials for them to use.

“There’s just a feeling of laziness to everything right now because we worry that the election may be postponed at any minute,” al-Tamimi concluded.