Basra’s only clown paints his face, jiggling in front of the mirror.

Ali Sabah is almost 30 and he’s been clowning for over a decade now. His career began after dressing up as a clown to celebrate the Iraqi national football team’s victory in 2007. After the game finished, he went out onto the street dressed as a clown and began dancing.

By Mohammad Samara in Basra

“I watched how people interacted with this character. People were clapping and cheering,” he recalls. “So I decided to keep doing this. I hope to do it for the rest of my life.”

He began to try and learn about cloning more seriously and started reading books on the topic. There’s nowhere else in Iraq to learn this, he explains.

During his performances, he does a lot of acrobatics. He walks on his hands, while carrying fragile objects between his feet and performs back flips from a standing position. He also incorporates hip-hop dance moves and martial arts in his routine.

Although he has heroes in the clowning world – these include Charlie Chaplin and Mr Bean – he has choreographed his own routines so that they have a special resonance for Basra locals. They are unique in the world because he uses local music and clothing. 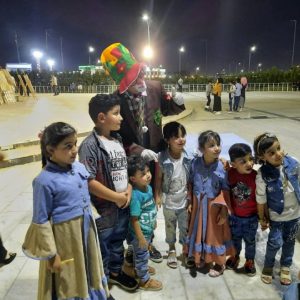 When he’s not being a clown, Sabah is also a professional actor and a member of the local artists’ union who has also had some success in theatrical plays in Basra.

But clowning is really his first love. To encourage more children and youth into this area, Sabah founded the Basra Clowning Troupe. This group had some success and even held a few workshops for local children on how to act in character and how to put together a clown’s costume and make up.

Unfortunately, and despite its apparent innocence, the members of the clown group were often insulted and harassed. In Basra’s conservative society, the unusual pastime was seen as “a disgrace”, Sabah says sadly.

“Everyone around me rejected the idea of ​​clowning,” he explains. “Even my own family were harsh and told me horrible things when I was out in public in costume. The same thing happened to the other members of the group too.”

Some of the group’s members stopped clowning because of this kind of harassment while others departed because there wasn’t enough money in it. But Sabah still clowns for money and has recently been able to put on shows in local shopping malls. He’s also added clown makeup for children to his repertoire and that has been popular and gained him more fans and more bookings. He now makes enough money to earn a living even though he also performs a lot of free in places like children’s wards and orphanages.

“Our performances never made us much money anyway,” he says, recalling how the clown troupe eventually disbanded. “So now I’m the only clown in Basra.”