Um Falah is uncertain exactly how old she is. Quite possibly, she is almost 70 years old, she suggests. But she is still working. Most days, you will find her perched on a piece of cardboard at the Safat market in the southern Iraqi city of Basra, selling freshly plucked mint and parsley.

By Nagham Makki, in Basra

Um Falah says she chose this spot near a perfume stall, so that the smells of the fresh herbs and cosmetic scents mingle together. On the other side of the path through the market there’s a fruit seller, calling out to entice people to his stand.

“My husband died during the Iran-Iraq war,” she explains; the war lasted from around 1980 to 1988. “I found myself a widow and single mother to two children, a girl and a boy. So I started selling vegetables and I still do it today.”

She began working in the market because she didn’t want to beg for a living.

Usually Um Falah’s days begin at seven in the morning at the wholesale vegetable market. She buys her goods at cost, then loads them onto a basket on her head and walks to the market. This is particularly tiring when it is very hot in summer or raining in winter, she notes.

Hopefully today she will be able to sell what she has bought, Um Falah says, although sometimes she doesn’t sell as much as she’d like. Most days she makes a small profit of around 500 Iraqi dinars (US$0.34).

“When I don’t sell anything, I really lose my appetite and get tired,” she notes, with a laugh. “Can’t you see how thin I am?”

Um Falah is far from the only widow plying her trade in this market. Although Iraqi social custom dictates that it is the extended family that should act as a social security net if, for instance, a husband dies, for some women this just isn’t possible.

Because of the many conflicts that Iraq has seen over the past decades, local human rights organizations estimate that there are at least 3 million widows in the country.

Not far from Um Falah’s spot sits another woman, also dressed in black. She is selling homemade pastries and has placed them in front of her.

Her name is Um Hussein and she is 40 years old. “I started working here about 17 years ago after my husband died,” she explains. “I couldn’t think of anything better than making pastries. It’s a job I know and love. And in this way I’ve been able to support my daughters and son.”

Um Hussein’s day also begins at sunrise when she bakes her treats and then wraps them. She usually doesn’t start selling them until later in the afternoon though, after the stores are closing.

Every now and then members of her family will pass by the market to check on her and make sure she is OK.

Around the corner, in another street near the market, you will find another widow. Um Abdullah sits on the ground, holding a bamboo fan. In front of her are other goods made of bamboo. 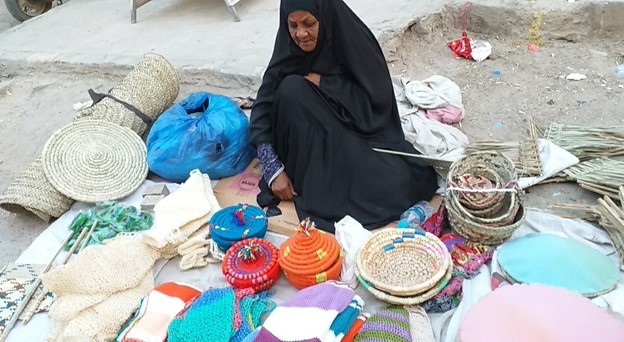 “My late husband and I used to make all of these,” the 70-year-old says, gesturing at her products. “But since he died I am on my own.”

Um Abdullah doesn’t make the products herself anymore but instead buys in bulk, using her knowledge of the handicrafts, and then resells the bamboo goods here. She only works in the afternoon though.

“I get tired because I’m old and my joints ache,” she explains.

These are not the only widows you will meet in this Basra market. You will find many others just like them, all united by sorrow, hard work, fatigue and love for their families.