When Kwestan Akram Faraj took up the job of Municipal Director in the northern Iraqi city of Halabja five years ago, feminist Kurdish expected that other women might soon occupy positions of power there too. Because this city has been good to female leaders.

To other residents of Iraqi Kurdistan, it’s a slightly odd phenomenon. Ten women have positions of leadership here, yet the city is also in the middle of territory well known for its conservative and religious families who adhere to traditional tribal laws and customs.

The people of Halabja themselves don’t seem to care who is in charge – as long as they adequately manage and represent the city.

Faraj herself began work as an employee in Halabja’s municipality in 1993 and over the ensuing years, she has slowly been promoted through the ranks, from department head to deputy head of the council to council leader today.

Together with other members of the local government, Faraj launched a campaign to revive her small city, a town ravaged by war and infamous throughout the world for 1998’s gruesome and horrifying attack upon former it with chemical weapons by the Iraqi dictator Saddam Hussein. Up to 5,000 people in Halabja were killed as a result of the attack.

When it comes to making her city a success, Faraj is a believer in gaining experience. “Women cannot easily face problems if they do not have the needed administrative competence,” she says. “They should also have courage and be able to be flexible in order to succeed,” she concluded.

The current mayor of Halabja is also female. Nuxsha Nasih likes to remind people that she is following in the footsteps of Adela Khanum, the first female to hold the mayoral post in Halabja at the turn of the 20th century, between 1909 and 1915.

Adela Khanum was a unique woman and, unusually, also the ruler of a local clan, the Jaffs. A fan of education and development, she transformed Halabja from a small, neglected northern district into a thriving city. Halabja residents thanked her by building a monument to her

Nasih is proud to be the second female mayor of Halabja. No woman, other than Adela Khanum, was ever a mayor in the whole of Iraq.

Halabja was recently made the fourth province of the semi-autonomous northern region of Iraqi Kurdistan – the other provinces are Erbil, Sulaymaniyah and Dohuk. Now Faraj, Nasih and other female leaders there are trying to develop their city with the slogan, “Capital of Peace”.

“Of course, Iraqi Kurdistan is part of the Middle East,” Faraj concedes. “We have a male-dominated society and women’s skills are not readily recognized, especially when it comes to working in city councils or similar jobs” Faraj argued. it is different here, she adds.

“Halabja’s educated people have always supported women and there are many examples of this,” adds mayor Nasih. Before she became Halabja’s 55th mayor, Nasih, a law graduate, was in charge of the Biyare sub-district near the border with Iran.

Elsewhere in Halabja other female leaders are also making history. Mahabad Kamil Abdullah is the first female dean of the University of Halabja and Suzan Hama Sharif is a judge, while Gulistan Ahmed heads the city’s human rights commission. 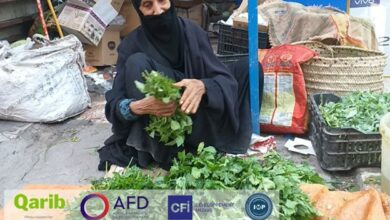 A WIDOW’S WOES: At a Basra market, female household heads eke out a living