In the southern Iraqi city of Basra, nine-year-old Sama is creating her own world. She draws cartoon characters that share her life and upon whom she relies.

By Nagham Makki in Basra

Sama’s mother discovered her daughter’s artistic talents and her special relationship with colors quite early on. Sama was just four years old at the time. Her mother believes Sama is so talented because she is autistic.

“I was surprised when I saw my daughter holding colored pencils and sketching her first drawings,” says the parent, who wished to remain anonymous because of the prejudice in Iraqi society against handicapped children. “Sama acted as if she was a professional painter who knew exactly what she wanted. I was very happy, and because I was so proud of her works, I published them on the Internet.”

This has made Sama something of a cause celebre for Iraqi artists. Some well known painters have interacted with Sama online and encouraged her to draw more.

Research suggests that Iraq has around 75 cases of autism per every 10,000 locals aged between five and 11 years old. Autism is a developmental disorder that usually appears while the child is still a toddler.

Symptoms include problems with social interactions and communication. Children with autism may find it hard to talk or play with others and make friends. They tend to be overly sensitive to sensory stimulation and can panic if a situation is too noisy or emotional.

With Sama, her mother realized she had this problem when, aged around 18 months, the little girl stopped responding to her name. “When she started walking, she was hyperactive and didn’t pay attention to other children,” Sama’s mother explains. “I knew then that she was different.”

It was hard to find medical help in Basra, Sama’s mother says. “I was heartbroken for her so I decided to try and teach her at home, introducing her to educational programs online. I also bought her art supplies.” 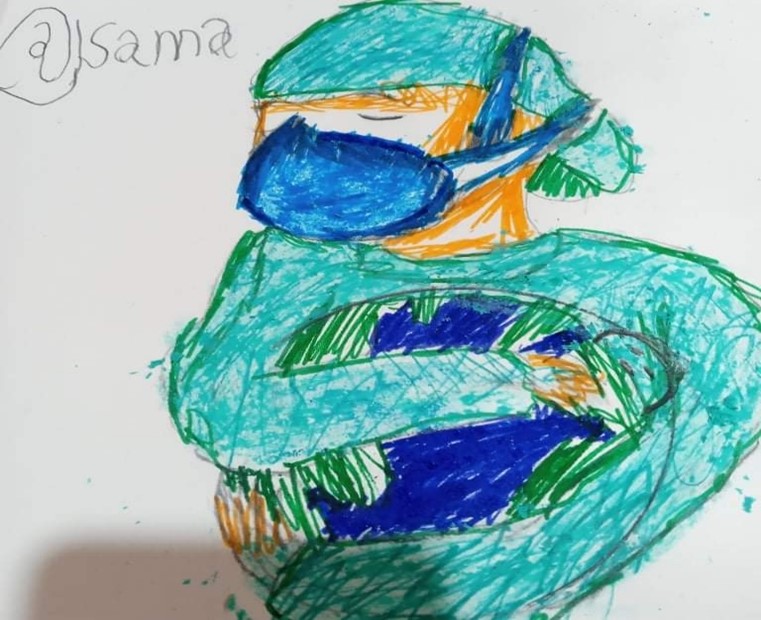 When Sama was around eight years old, she also began taking medication and this has improved her condition somewhat. She is now able to visit other members of her family – before it would stress Sama out too much.

There are few institutional facilities in Iraq to help Sama. Her mother says her main concern now is getting the adequate child education. She has not been able to attend any official schools or programs in Basra.

“That is despite the fact that she is a smart girl,” her mother says proudly. “She learned to read and write by herself, when she was five. And today she is more fluent in English than Arabic.”

Maintaining a calm and quiet atmosphere around the child has helped her, Sama’s mother explains. “We are a small family and we understand her condition,” she says. “She herself knows that she has autism now. Whenever she has an attack or panics we all try to help her by hugging her.”

When Sama turned nine recently, her mother finally decided she should try to go to school. Because of her intelligence, Sama often comes top of the class – that is despite the fact that her teacher is not a specialist with autistic children – but at the time, the little girl also often has angry outbursts at her classmates.

A local psychotherapist Munther Salman explains that Sama’s family is doing exactly the right thing. There is no cure for autism, he notes.

“But the family should integrate the autistic child into society and not consider the illness as something shameful,” Salman concludes. “Autistic children have the ability to do much for society because of their intelligence and outstanding skills. For instance, a lot of people don’t know that [the physicist] Albert Einstein was very likely autistic.”