Mosques have became media outlets for Daesh organization. It was from Noori Mosque platform that ISIS declared his self-proclaimed state. ISIS worked to convince and persuade people of his policies throughout the period of his rule on Mosul (June 2014 – 2017). ISIS established an Endowment for Mosque to replace the Department of Endowments in Mosul. This endowment acted as a bureau to force Mullah (religious learned men) and speakers to read a unified speech and the majority of these speakers were loyalists and supportes of ISIS organization.

Out of control
How ISIS organization took control of the entire Mosques in Mosul has a long story. There were religious schools teaching and spreading extremist ideological thinking through secret meetings, distributing video tapes and CDs of Murder, intimidations, leaflets and anthems that glorified extreme militant thinking. 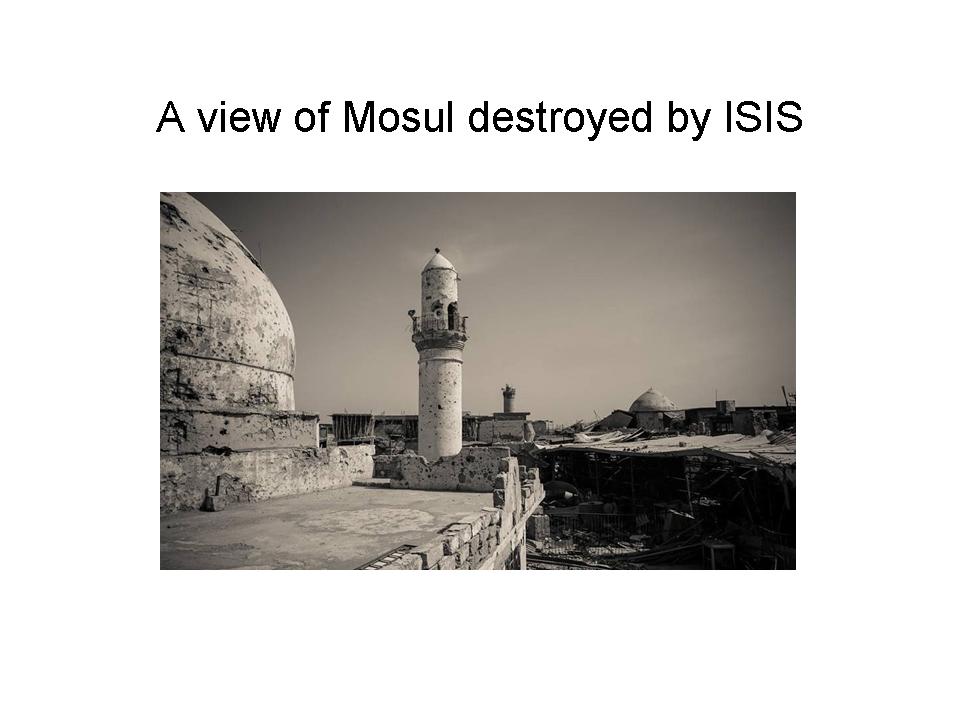 “About a thousand mosques were outside the control of the Religious Endowment before the fall of Mosul and its capture into the hand of ISIS. The owner of Mosques usually appointed the servant, the muezzin (Preachers), the imam and the rector without referring to the Endowment Department” says Mohammed Al-Nuaimi who is the director of the Inspection Division in the Nineveh Department.

“The threats and intimidations of Al-Qaeda organization at the time significantly limited Endowment’s ability to extend its influence on mosques, which numbers 2,780 throughout all of Nineva province.” Mohammed Al Nuaimi added. After the Iraqi forces regained control of the city the Endowment Department quickly focused on to control the administration of Mosques and replace the preachers and Imams with those who were reliable people. However, there are several administrative obstacles which limits their work, namely, the shortage of staff. Al-Naimi explained that the number of appointees to the Department of Endowments of preachers and Imams is 628 only, but there are about 2,000 mosques that still need preachers and now we rely on those preachers who sermonize voluntarily without payment and this is the result of lack f staffing.

New measures
Moreover, there is now coordination between the Endowment Department and the security services to ensure that all mosques comply with the instructions of the Endowments Department, especially for the unified Friday sermon. Now the Friday Prayers and Preaching are subjected to security checks to not allow hatred and extremist ideologies. For example, the preachers in the center of Mosul should assigned a letter and to be commended by the district leader in addition to recommendation by three reliable clerics. This procedure applies to all areas and districts of Nineva which are subjected to intensive security checks from either intelligence, National security and or security forces who control the region. Further emphasize is on remote and isolated areas because they were under the control of terrorist groups for a long period of time.

The fear of the return of extremism and the wreaking of havoc to the city began with many of its people. So there are constant calls and demands to put the mosques under surveillance and not to allow them to become a platform for extremist intellectual ideas again.

Sheikh Mohammed Al-Shamma, the preacher of the Prophet Mohammed Mosque says that “The unified sermon is a precautionary measure to prevent certain speakers from being embarrassed or to be held accountable for security or legality”. He also says that “The unified sermon issued by the Department of Endowment helps to preserve the intellectual unity of the society, as well as the small number of preachers. The pre-ISIS period was where most of the speakers were donors, so control over them was difficult,” he said.

Ahmed Hashem, a resident of the district of Unity in Mosul says that “you have to monitor mosques and put them under surveillance to prevent anyone who might want to interfere in their administrations and or prevent certain people who want publicity and or use the mosque for distributing publications of any posters especially without written and formal consent of the department of Endowment”, Also “Despite all the new measures and procedures taken by the Department of Endowments and the imposition of unified sermon, but many of the speakers lack the simplest elements of rhetoric” adds Hashem.

Ali Saeed, an owner of a shop selling electrical materials in the Nabi Younis area, criticizes Friday sermons by saying that “These sermons tackle only superficial issues and they are shy and or not bold enough to address the root causes that created ISIS and or how to deradicalize and fight ISIS ideologies in the last three years.” Saeed believes that it is not adequate just to argue that ISIS and or its followers do not represent Islam, they need to prove with evidence. Therefore, according to Ali Saaed Mosul mosques still need more control, especially small mosques among the neighborhoods, and those mosques established over the past 15 years.

Muhsin Essam, a resident of Al-Zahra neighborhood in Mosul notices an irony in that there are a large number of mosques being build on lands that are overrun by people. He says that in their neighborhood there are four small mosques that have been build over the last ten years and that these mosques are exploited by extremist groups to recruit and radicalize many young people and promote their terrorist projects.

The Department of Endowments is currently trying to rectify the problem and impose procedures in the construction of mosques through conducting a field survey of a committee comprising the engineering, inspection and mosques division in the endowments, and decided to approve or reject the construction of the mosque as needed.

This procedure is followed by another requirement. According to new rules those people who want to build new mosques should own the land by themselves and they cannot build mosques on land and or property they do not own legally. Also these mosques should be within the urban planning of the city and it should be approved by the mayor and or municipality of Mosul. The story of Mosques are not over. Increasingly, more and more people demand that mosques should be further regulated and controlled and under tight control to prevent radicalization. Some even go further, they call for the postponement of reconstructing the destroyed mosques, and instead give priority to rebuilding other much needed infrastructure like hospitals and schools.