The current head of the United Nations mission to Iraq is causing debate among ordinary Iraqis, partially because she is one of the only foreigners in years to have been able to meet with spiritual leader Ali al-Sistan.

Dutch diplomat, Jeanine Hennis-Plasschaert – who is the Special Representative for Iraq and head of the United Nations Assistance Mission for Iraq, or UNAMI – recently met with the commander of Iraq’s so-called Popular Mobilization Units, or PMU, former volunteer militias called up to fight the extremist group known as the Islamic State. Abdulaziz al-Muhammadawi, who’s often called Abu Fadak, is also the leader of Hezbollah in Iraq, a group that is known for its ties to Iran. Plasschaert’s meeting with the military leader saw her widely criticised in Iraq, with some locals accusing her of treason for working with the often-controversial PMU groups.

Plasschaert responded that the United Nations’ work must be based on neutrality and that this requires she deal with all stake holders to resolve problems. Dialogue is the only way forward, she argued.

Plasschaert had met al-Muhammadawi because of ongoing missile attacks that have targeted Baghdad’s high security Green Zone, where various international embassies and Iraqi ministries are based. US and coalition forces had been specifically targeted, in Baghdad, at Baghdad airport and also in northern Iraq in Erbil. This had prompted US authorities to threaten to withdraw from Iraq altogether. 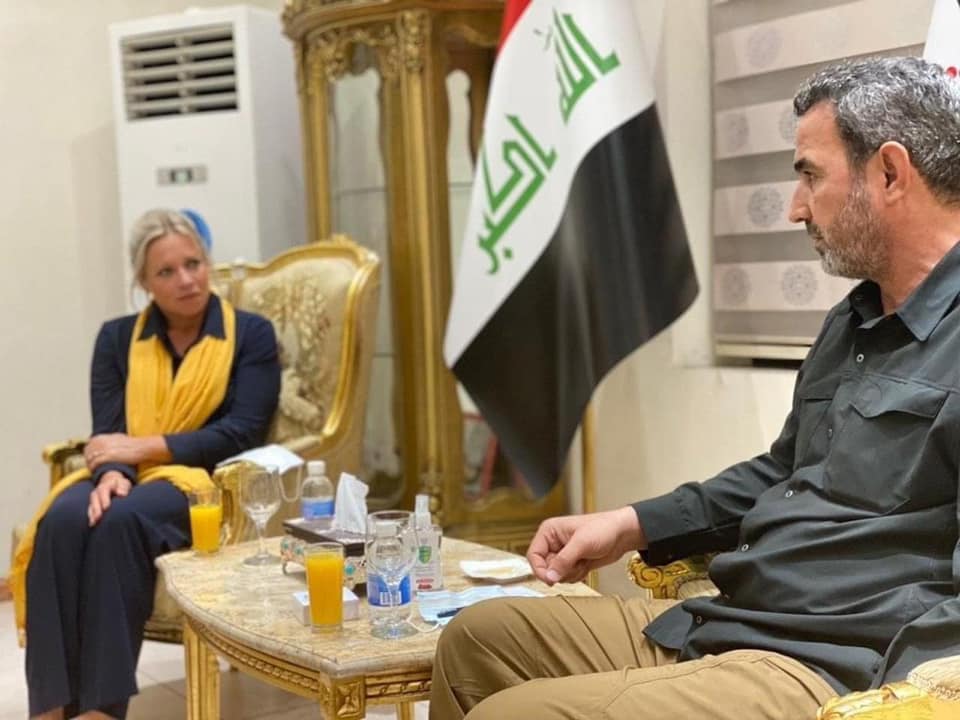 Most Iraqis understand that if the US, a major Iraqi ally, closed its embassy and completely withdrew from the country this could be devastating. The US still offers Iraq military and financial support. There were also murmurs that if the US left, then other European nations and potentially also other Arab countries, would also leave Iraq. Iraq would be isolated.

Days before her meeting with Hezbollah’s al-Muhammadawi, the UN representative had already held meetings with senior staffers and politicians all over Iraq, including the Iraqi President and the country’s beleaguered Prime Minister, as well as heads of security and military. After these meetings, Plasschaert said that she also intended to visit Iran to discuss the same issues.

But this far from the first time that the Dutch diplomat has sparked debate in Iraq. When popular anti-government demonstrations began last October, she appeared at the protests in a three-wheeled “tuk-tuk”. This modest form of transport became a symbol of valour at the protests after the young tuk-tuk drivers took on the task of ferrying wounded away from the sites. Obviously, the younger generation of anti-government protesters, who were there calling for an end to political corruption, admired Plasschaert for this. But other parties, such as the Shiite Muslim-majority political parties criticised her for her joyriding.

Possibly the meetings that have caused the most attention for Plasschaert though, have been those with senior Shiite Muslim spiritual leader, Ali al-Sistani. The ancient cleric is respected by Iraqis and by Shiite Muslims around the world but he is concertedly anti-political. Yet within one year Plasschaert has been able to meet the cleric twice at his home in the southern Iraqi city of Najaf. The most recent meeting was on September 13 and it even generated a rare video clip of al-Sistani, putting paid to rumours about the 90-year-old’s ill health. Following the meeting Plasschaert made a strong statement about Iraqi politics, quoting the elderly cleric. Al-Sistani’s office also released a statement after the meeting. 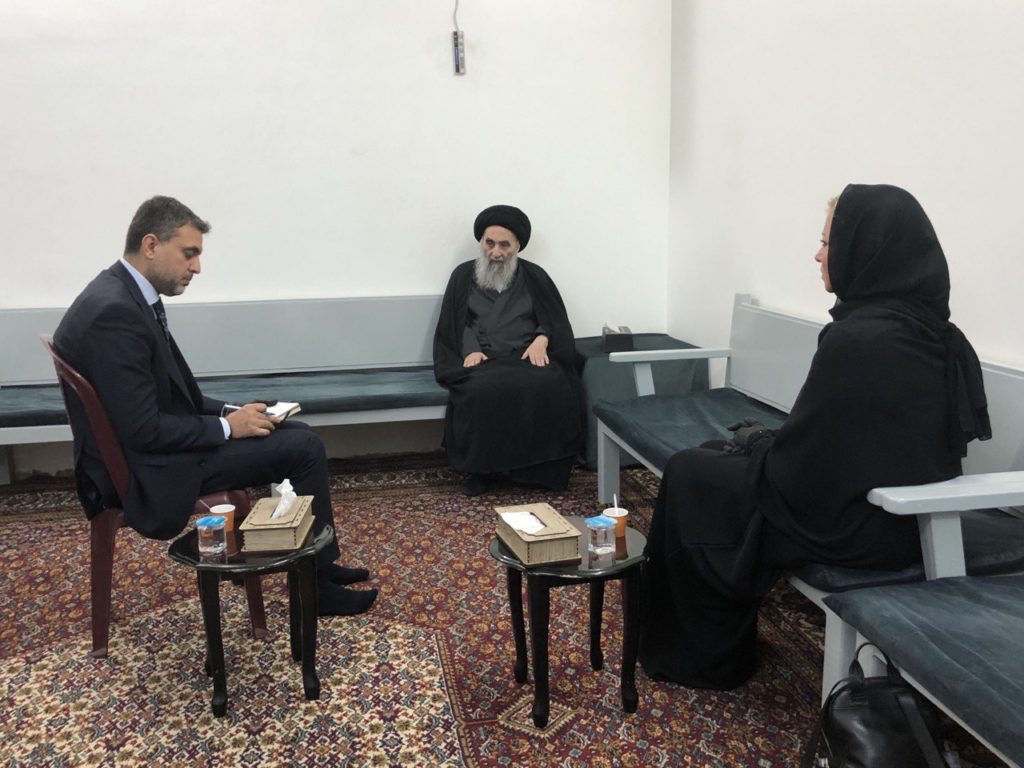 Yet Iraqis remain divided about Plasschaert’s headline-making activities and her brutally honest statements about the state Iraqi is in – she is able to say what many Iraqis cannot.

Some older Iraqis have described her as the new version of the famous British administrator, Gertrude Bell, who travelled all around Iraq representing the British government during the 1920s. Bell, who was eventually buried in Baghdad, met all kind of Iraqis, from clerics to politicians and illiterate tribesmen and worked for Iraq, becoming a link between the country and the British government.

“Iraq hasn’t seen a female diplomat like that since we had Miss Bell,” says 59-year-old Baghdad local, Muayad Abdul. “That’s why we call Jeanine Plasschaert ‘the Dutch Miss Bell’,” he explains.

Meanwhile younger Iraqis’ opinions of the UNAMI head vary according to her latest actions and meetings. When she speaks on behalf of the protesters about Iraq’s problems, they love her. When she meets with controversial politicians and military leaders, they criticize her.

“The UN shouldn’t be meeting with the people who caused the crisis in Iraq,” insists Mazen Mohammed, one of the young men who regularly demonstrated in central Baghdad. “Her meeting with Abu Fadak was only provocative and she needs to think twice.”

Plasschaert is the seventh special envoy to Iraq from the United Nations – UNAMI was first established in 2003 – but the first woman to take on the job. It is probably fair to say that none of the other envoys attracted as much attention as Plasschaert is.

But the deep divisions between the Iraqi people and their political class makes Plasschaert’s job particularly difficult. Ordinary Iraqis would prefer that she listen to them and not their leaders, whom they see as corrupt, while Plasschaert’s mission clearly entails her meeting with officials and politicians, even some of those who are considered extremists. 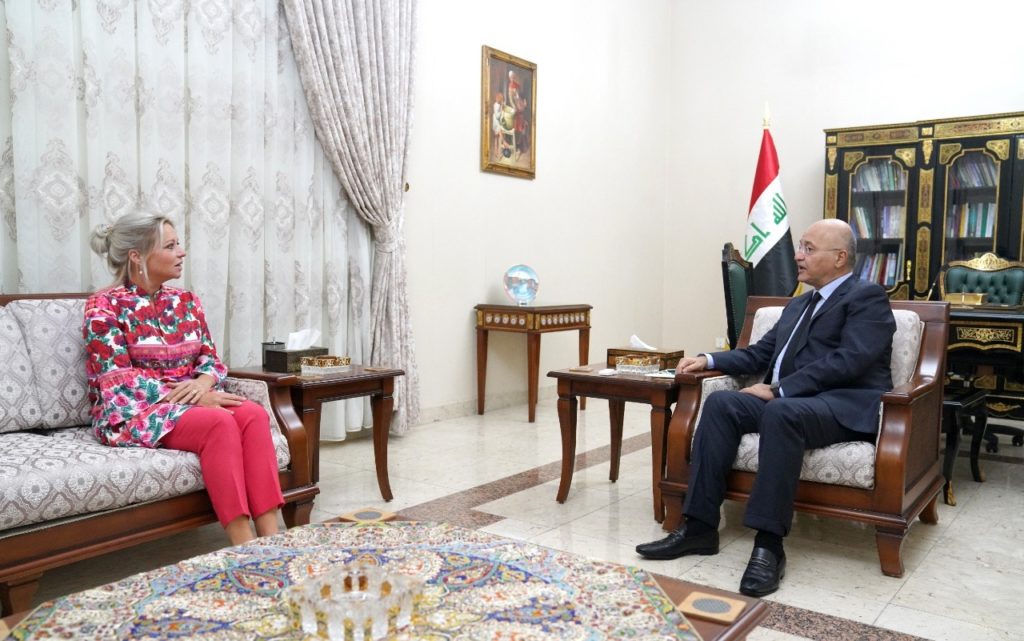