It has been just about five years since the northern Iraqi city of Sinjar was liberated from the extremist group known as the Islamic State. But thanks to the presence of multiple militias and political rivalry, the displaced do not want to return home.

The extremists took control of the city and district in August 2014, thereafter kidnapping, killing and enslaving local members of the Yazidi religion. The extremists were pushed out again in mid-November in 2015.

Today, rival local authorities and an unstable security situation mean that tens of thousands of Yazidis, who fled the city in 2014, are still clinging to their places in camps for the displaced. They have had to put their hopes of returning home on hold.

“Nothing is there for me to return to,” Nayef Khader says bitterly; he lived in Sinjar for 42 years before the extremist Islamic State, or IS, group invaded. “I lost four members of my family, including two brothers. I lost everything I owned and my house is just rubble now. We thought the government would rebuild the city, create jobs and compensate us for some of our losses, but it was just dreams.”

According to local authorities, the attack on Sinjar resulted in the deaths of at least 1,293 Yazidi people and the kidnapping of around 7,000 women and children. Over 200,000 people were displaced from Sinjar and hundreds of thousands also emigrated after the attack, to settle outside of Iraq.

As soon as the fog of war cleared from over Sinjar – or Shingal, as it is known in Kurdish – the first signs of the new administrators of the area were apparent. Today there are two factions, both of which are backed by armed groups.

One is headed by Fahd Hamed Omar, who was appointed as mayor by the central government in Baghdad. His area of influence extends over the centre of Sinjar and towards the south of the district.

The other authority is Mohamed Khalil, a politician allied with Iraqi Kurdistan’s ruling party, the Kurdistan Democratic Party, or KDP. His influence extends mostly over the northern region of Sinjar.

The Sinjar district is just over 100 kilometres west of the city of Mosul, in the province of Ninawa, and its inhabitants are a mixture of many of Iraq’s confessions and ethnicities. The Yazidis mostly live in northern villages but there are also some in southern villages too. There they are joined by many Sunni Muslim Arabs. The centre of the city of Sinjar is inhabited mostly by Muslims, and mostly Sunni Muslims, as well as Shiite Muslims, Iraqi Kurds and Turkmen.

The two powers in Sinjar do not like one another and the conflict that their antipathy causes has significantly contributed to a delay in reconstruction here, not to mention an abiding sense of distrust. 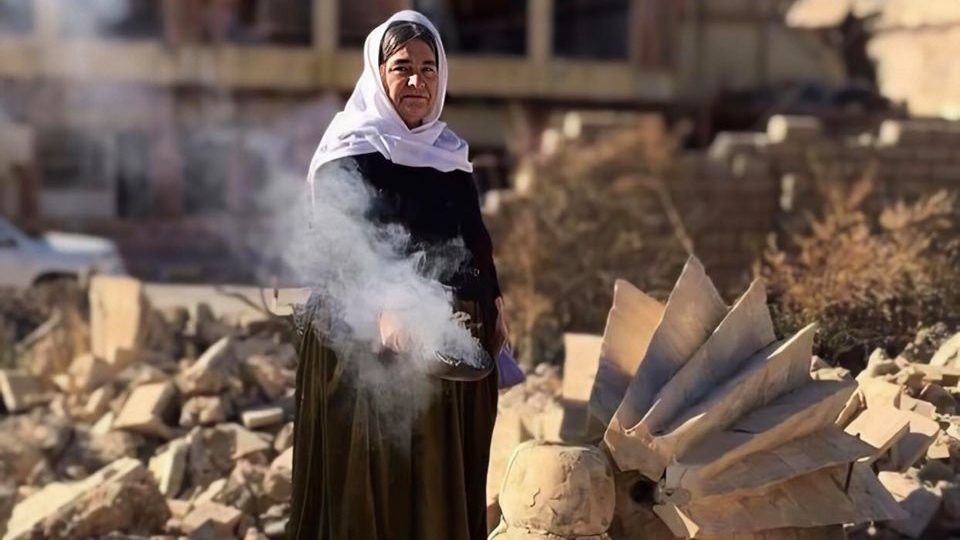 Khadida Khalaf Eido, a former member of Ninawa’s provincial council, points out that 80 percent of Yazidis’ property in Sinjar has been destroyed but nobody has received any kind of compensation because of differences between the federal government in Baghdad and the Iraqi Kurdish political parties in Erbil.

“Neither authority has implemented even one project,” Eido complains. “All the projects that have been carried out have been by international or local aid organisations.”

The head of the International Yazidi Foundation Against Genocide, based in Netherlands, has demanded that authorities in Baghdad and Iraqi Kurdistan’s Erbil cooperate and resolve these difficulties so that Sinjar can be rehabilitated. “Starting with the human beings and ending with the infrastructure,” Hesso Hormi has argued.

The attacks by the IS group caused deep social wounds, Hormi explains. Many Yazidi no longer trust their neighbours or their officials. He has seen a rise in phenomena such as suicide, early marriage and mass migration as a result, he says. The Yazidi themselves need to be in charge of reconstruction and reconciliation, Hormi adds. It cannot come from Baghdad or Erbil. Otherwise, “the vast majority of Yazidis will choose to stay in camps in the Iraqi Kurdish region and postpone their return to Sinjar,” he concludes.

“It is not easy to return to Sinjar as the majority of the displaced – and I am one of them – are poor and deprived,” explains Haji Elias, 36, who is originally from the smaller town of Sinun in the Sinjar district but who currently lives in a  camp for displaced persons on the outskirts of Dohuk in Iraqi Kurdistan. “In the camps, we find food, medicine and fuel, and there are job opportunities in Dohuk and Erbil. Our children go to school. We won’t find all this if we return to Sinjar.”

After visiting the Kadiya displaced persons camp for Yazidis in Dohuk, Iraq’s Prime Minister Mustafa al-Khadimi said his government was working hard to restore security in Sinjar. He also said that in the future the area would be protected by its own people.

“You will return, I promise,” he said on national television, while holding the hand of a young Yazidi man.

The political situation in Sinjar will make it challenging for al-Khadimi to keep his promise. And the military situation will make it even more difficult. There are an estimated 20 military groups present in Sinjar – that includes the Kurdistan Workers’ Party, or PKK, along with allied militias, the Iraqi army and a number of armed tribal groups.

Former council member Eido says there is no way that the Iraqi army can maintain security here, especially in the areas bordering Syria. Residents “do not trust the security forces in control at the moment, no matter what their name is,” Eido maintains.

“Nothing has changed,” says Mayser al-Adani, a former spokesman for the Kidnapped Yazidis’ Rescue Office, grimly. “The fate of more than 2,900 Yazidi men and women remains unknown, religious shrines are still destroyed and the southern villages of Sinjar are almost completely empty.”

“Nearly 70 percent of Yazidis are still in camps for the displaced and emigration is in full swing. Recently mass graves were discovered. Yet, even today what happened to the Yazidi people is not acknowledged as a genocide, despite ongoing local and international movements towards recognizing this,” al-Adani states.

What happens next to the Yazidi people, nobody knows, he concludes mournfully. Many of them have simply adapted to being displaced or they have tried to leave. Certainly they have lost confidence in those who say they represent them. “There is no united Yazidi voice,” al-Adani notes. “We lack leadership.”

However there are also some small glimmers of hope. Dohuk University student Hiyam Hasso points out that, after all that the Yazidi people have gone through, there have been some changes in how this people treat their women. There has been some loosening of restrictions on Yazidi women and it is now possible for some to go to university and even to get a job.

“Yazidi women are no longer limited to agriculture or herding animals,” Hasso says. “All fields are open to them and they can be of service to their own society, as they should be.”

Hasso knows that the price paid for these new freedoms were too high. “Thousands of Yazidi women were kidnapped and men killed, homes destroyed,” she says. “But that is why my ambition is so great. I want to pay back this debt to all those who have sacrificed.”