For years, passers-by in the southern Iraqi city of Basra have seen Radhia Saleh sitting on a simple rug on the ground, near the pastry shops in a central city market, selling her wares. They know her as Um Qassim – but they likely know the traditional Iraqi breakfast she sells, even better.

Saleh, 45, makes what is known as geymar, an Iraqi dish of clotted cream made from water buffalo’s milk that is often in great demand during parties and holidays.

“My family has been making geymar for years,” Saleh told Al Menassa. “My mother, my grandmother and other members of our family would gather together to make it and the atmosphere was always wonderful and cooperative.”

Saleh chose her spot in this Basra market carefully, near a store that sells flat bread called samoun and a syrupy pastry treat called kahi. Customers usually first buy a piece of the bread or a pastry and then they come to get their geymar from Saleh. The items make for a traditional southern Iraqi breakfast.

Saleh’s day starts much earlier than her customers though. She usually gets up around 3am and after a simple breakfast consisting of milk and bread, she heads to the barn where she keeps her water buffaloes. She milks them and then begins the process of making geymar with the milk the creatures produce. She transfers the milk into an aluminum pot which she places on a low heat. As soon as the milk begins to boil, she turns off the heat and lets it cool. After this, she places a thick piece of cloth over the top of the basin and lets the milk settle for a full day.

Saleh emphasizes that geymar must be made with buffalo milk or it won’t taste the same and her customers won’t buy from her again. “Buffalo milk has a distinctive taste and it’s high in fat, different from other kinds of milk,” she explains. 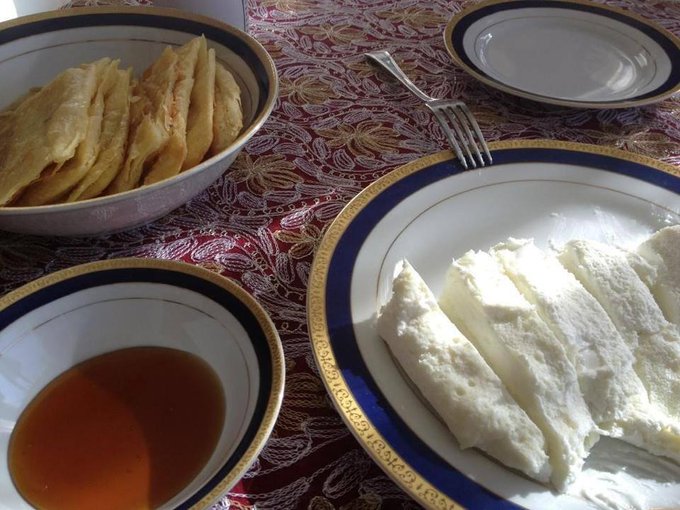 As she talks, Saleh begins to prepare the geymar she started working on yesterday. She removes the cloth to reveal a thick layer of cream floating on top of the surface of the milk. This is the geymar. Using a knife, she removes the thick layer of cream and chops it into pieces, pouring icy cold water over it to speed the cooling. Finally the pieces are laid out in a flat tray, ready for sale.

To increase the amount of product she has available, Saleh splits her geymar into two types. One is mixed with milk to make it more liquid, while the other is creamier and thick. “Most people prefer the creamy type though,” she acknowledges. She has also used the buffalo milk to make yoghurt and cheese.

Interestingly enough the toughest part of her job has nothing to do with the buffaloes or even having to get up so early. Every day she must walk long distances to fetch ice because, as she remarks, the geymar is eaten cold whether it is winter or summer.

Every day Saleh tries not to leave the market until she has sold all of the geymar she came with. At the moment this isn’t so easy because the COVID-19 pandemic has seen a decrease in the number of shoppers in the market and has also prevented the larger events, where geymar is often served, from happening.

In the past, Saleh recounts, she would come home so happy on holiday mornings because she would easily have sold all of her product early on.

“The cost of transporting the geymar trays from where I live, north of Basra, to the city center adds up to about IQD10,000 (about US $ 7) per trip,” she explains. “When I don’t sell enough, the whole day’s effort is wasted. “Returning home with even half a tray of geymar means a loss to her family.

Apart from selling her geymar, she has simple wishes. “In the winter, I pray that it doesn’t get too cold as the market isn’t very warm or dry,” she notes. “And in the summer I just hope it doesn’t get too humid, because that spoils my geymar. “

MEETING UM JASSEM: An icon of the dried fish trade

4,500 YEARS OLD: Once the equivalent of today’s latest Playstation offerings, this ancient Iraqi game is making a comeback

PUTTING PEOPLE TO SLEEP: The oldest upholsterer in Basra