The displaced people of Mosul returned to their city after liberation of the city from the grip of so-called of Daesh group, and the traces and cultures of the city is firmly remembered in the minds of many of the southerners, including the well-known popular cuisine. These popular cuisine and the cultures that affected the population through their songs, clothing and ways of life.

With determination and calmness,  the forty year old Al-Wasitiya (Umm Zayd) succeeds in preparing dishes for her husband who appear to be dealing with the Mosulawi cuisine including “Al-Burghul, and granular Kubba Al-Burghul Al Musaliyah”. These are popular Mosul cuisine always tempt visitors from Al-Wasitiya and the exceptional marks of Southern Kitchens.

(Umm Zeid), a skilled cook who is very good at cooking popular dishes in Kut, has succeeded in preparing and cooking popular cuisine characterized by its Al-Mosulawi nature.

The cook, who lives in the outskirts of Wasit, says that the characteristics and diversity of the cuisine of Mosuli have found their effect in the Wasti cuisine and were clearly reflected in the popularity of some famous dishes. She also said that she “Has learnt cooking Mosulawi Cuisine from one of her displaced friend who was residing near her house”.

While the Wastiya cook is preparing a meal in the Mosulwai veins, she says that “most of the Mosulawi foods are full fat and add more energy to the human body, which is a tasty,  they are also low-cost diet.”

Not far from what is said by the cook of the Wasitia, Um Adris who arrived in the southern city of Kut, after being displaced from Mosul, can not find a better time than meeting the women of the neighborhood where she lived before her return to Mosul, where the interest is in shared skills and cooking arts and preparation of famous popular dishes in both cities.

This Mosuliyah woman, who is still visiting Al Kut periodically says that she has been able to learn to prepare and manufacture many of the dishes that are characterized by its southern nature, and that through the exchanges of visits between women and learning the cooking of food with the flavors of both cities that are famous for born a kind of familiarity and attachment between families.

The Mosulawi cooker with happines and pride in her faces says that “A large part of the Southern folk food was not known among the people of Mosul prior to the displacement, but they accepted it and dealt with it permanently because of its fame in the southern cities where they lived”. 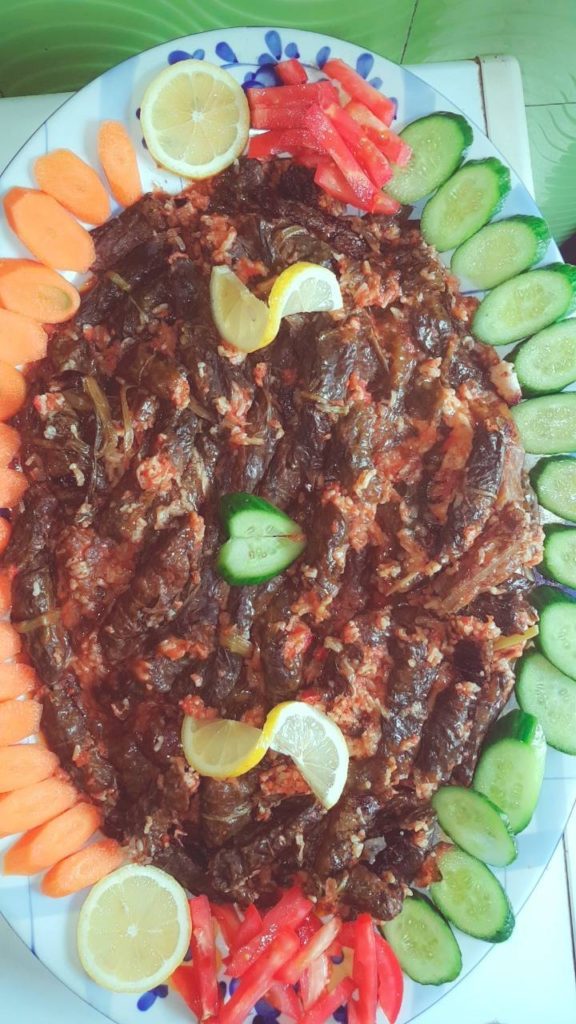 One of the cuisine prepared by Mohammed Al Mosulawi

The idea of cooking the southern dishes was not only appreciated by women, but also by men, including Mohammed Hamdan, a student from Mosul who still has settled his home and family from Kut. He also worked in a small restaurant serving charcoal to customers according to the Al-Wasitiyah cooking style.

The 20-year-old displaced young man from the right side of Mosul says that he “managed to form a strong network of friends and relations with the people of Kut who used to encourage him to work in the preparation of grilled fish.”