When he was young, he didn’t even realise how tall he was, says Araz Ibrahim Mohammed Ali, whose claim to fame is that he is Dohuk’s tallest policeman.

By Saja Sherzad, in Dohuk

“But when I got older, I started to understand that I was taller than almost everybody else,” says Ali, who now measures over two meters tall. “I expected that I would stop growing at some age, but I didn’t stop.”

One might have thought that Ali would use his height to do something like play basketball. However his family is not wealthy and the young man had to go out to work. For the past 12 years, he has been a police officer in Dohuk and has gained a reputation for being the tallest guy on the force.

“When I started work in the police department, my colleagues used to watch me and wonder about my height. This question was constantly repeated in markets and public places too. And that did make me think: Am I really that tall ?,” he laughs. “Or are people exaggerating?” 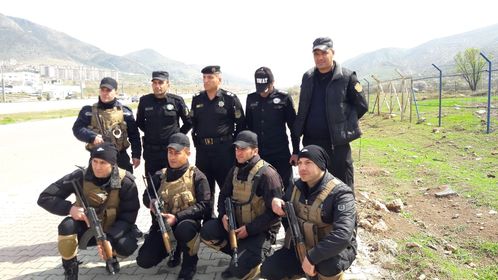 Ali knows he’s not the tallest person in the world but he has yet to meet anybody who is taller in Dohuk. “Sometimes when I see somebody at a distance, I think, thank God, now I have found somebody the same height as I am to be friends with,” he Al Menassa. “But then they get closer and I realise they are shorter than me.”

Finding somebody to marry him despite his height was also an issue but luckily one of his cousins ​​agreed, accepting her husband’s uncanny height.

His other big problem in Dohuk is finding clothing that fits. Ali has to make do with items that he can have altered to fit. His shoes are often a bigger challenge and he’ll usually end up searching out European shoes in the big-and-tall section because these shoes have a larger range; Ali wears size 45 shoes.

One other problem at work is that Ali can’t fit into smaller vehicles. So he is often tasked with driving the bigger military trucks. And afterwards, he says, his colleagues laugh because of how far the driver’s seat has been pushed back.

Although some might find Ali intimidating, at his height and in his uniform, his wife says that he is a very gentle man.

“He is very affectionate,” she says. “I help him find clothes that fit him and he helps me around the house.”

“At home or at work, there is no need for a ladder,” Ali jokes. “I’m always the one that people call to hang things on the walls or paint in the highest corners.”

The couple have two sons, Ali and Omar, but as yet it is unclear whether either of them have inherited their father’s attention-getting height. “I think Ali will be tall,” his father says. “But that doesn’t bother me. It is God’s will. I just want my children to be happy and healthy.”

Being so tall has not bothered Ali. “It is only when people stare at me strangely, that I feel I am some sort of odd creature,” he explains. 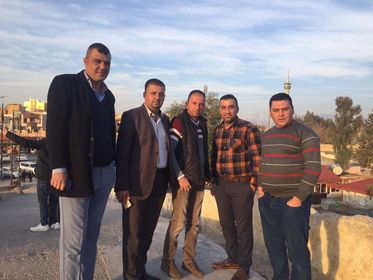 MEETING UM JASSEM: An icon of the dried fish trade

4,500 YEARS OLD: Once the equivalent of today’s latest Playstation offerings, this ancient Iraqi game is making a comeback